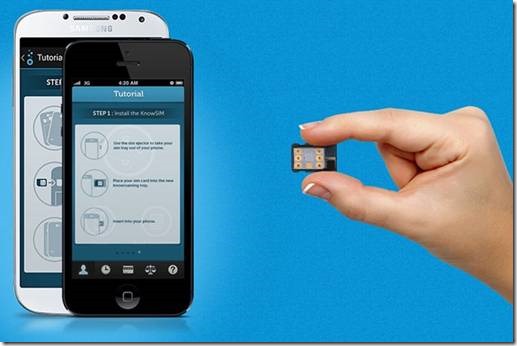 International Roaming rates costs a fortune when travelling abroad with your local SIM card; Of course you could facilely avail a SIM card from your destined Country, but who bothers if you can use your local-country SIM outside your Home Country with no Roaming charges whatsoever. This is exactly what KnowRoaming‘s smart SIM card sticker lets you do.

The folks at KnowRoaming had developed a smart sticker that can be applied on the SIM card; it automatically connects you to your local mobile network when roaming internationally.

It is not as simple as it appears, as you know by now that KnowRoaming wants you to attach a sticker over your SIM card; it also requires an application for its operation.

For now, the application is available for iOS and Android, which grants you to directly manage and add funds to your account (using a credit card), choose your local network, manage your numbers, and keep track of how much you are spending and saving. The app also lets you check local rates before you connect. You also have the option of purchasing a local number to make it easier for people in that country to call you.

This sounds like some sorcery, but there is an imperative that will put some people off. Your Android or iOS phone needs to be unlocked for KnowRoaming to work, besides, the Smart sticker doesn’t wave off the roaming charges entirely, KnowRoaming advertising, however promised to slash it off by up to 85%.

KnowRoaming sticker is now opened for pre-orders; the shipping of the stickers will however will be started in February 2014.