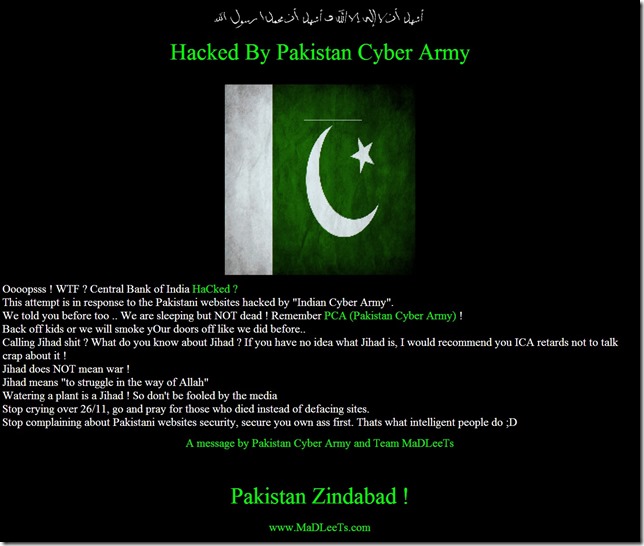 In response, Pakistani Hackers retaliated without sparing anything and hacked several Indian websites including the official website of Central Bank of India, state-owned and one of the oldest and largest commercial banks of the country.

Pakistani and Indian hackers keep on defacing cross-country websites to apparently show patriotism. It won’t be out of place to mention here that websites on both side of borders are largely notorious for lack of security.

Here’s the complete message pasted on Central Bank of India:

This attempt is in response to the Pakistani websites hacked by “Indian Cyber Army”.

We told you before too .. We are sleeping but NOT dead ! Remember PCA (Pakistan Cyber Army) !

Back off kids or we will smoke yOur doors off like we did before..

Calling Jihad shit ? What do you know about Jihad ? If you have no idea what Jihad is, I would recommend you ICA retards not to talk crap about it !

Jihad does NOT mean war !

Jihad means “to struggle in the way of Allah”. Watering a plant is a Jihad ! So don’t be fooled by the media

Stop crying over 26/11, go and pray for those who died instead of defacing sites.

A message by Pakistan Cyber Army and Team MaDLeeTs

Another Hacking group from Pakistan, “The Hackers’ Army”, has notified ProPakistani about over a dozen defacements. Here’s the list: