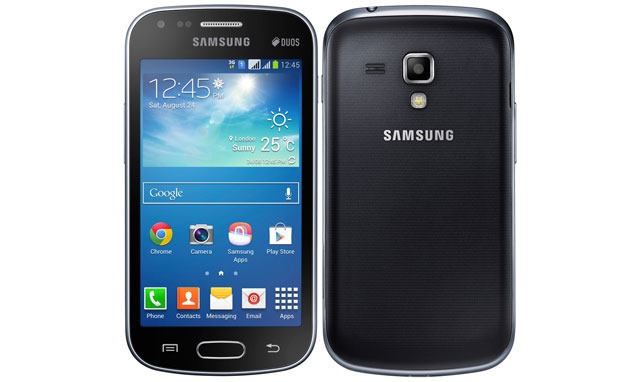 Samsung has unveiled yet another dual-sim Android Smartphone in the mid-range category, the Galaxy S Duos 2. The phone will be available for just about $175 in the coming weeks and still packs quite a punch underneath.

Starting from the display, the unit you’ll find here will be a 4″ capacitive with 480 x 800 resolution, the norm for this range. Aesthetics are nothing spectacular though with the phone weighing in at 118g and being 10.6mm thick.

Underneath, it packs a 1.2Ghz dual-core processor with 768 MB RAM and 4 GB internal memory, expandable via microSD card. Towards the back you find a 5 megapixel camera with 720p video recording, as well as a VGA camera for selfies.

Of course, the defining feature is the dual-sim compatibility itself but there will be an LTE single-sim version later as well.

phone is going to get price tag of around PKR 20,000 in Pakistan.

Here are the full specs of the Galaxy S Duos 2:

Given Samsung’s brand recognition and the kind of package you’re getting at this price, not to mention the dual-sim functionality, the deal really doesn’t sound too bad. Of course, specs written on paper just aren’t enough for the final judgement but right now, we can’t see any potential deal-breakers here.