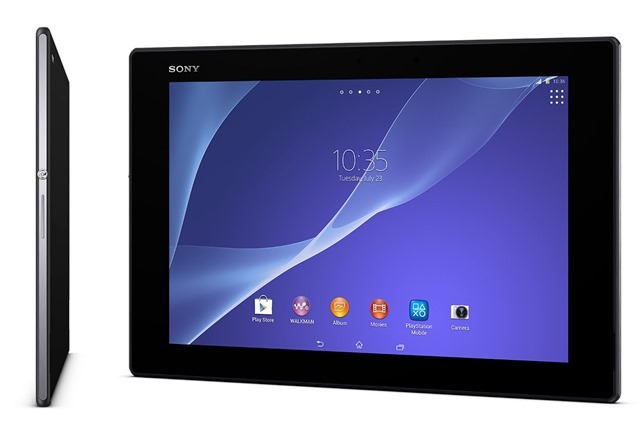 Sony has announced its new flagship tablet for 2014 at the MWC, the Xperia Z2 tablet. In case you’re wondering, ‘tablet’ is officially a part of the name too.

Sony is calling its new baby the thinnest and lightest waterproof slate in the world. At just 6.4mm thick and 439g heavy, the aesthetics of this tablet are really inspiring, even if the bezels are a big wider than we would’ve liked.

The front is home to a 10.1″ Full HD display. Apart from borrowing the name from Sony’s flagship smartphone, the tablet has also borrowed the display tech, namely, the Triluminos IPS panel with X-Reality engine.

Under the hood, you get a 2.3Ghz quad-core Snapdragon 801 processor and Adreno 330 GPU, along with 3 GB RAM and 16 GB expandable storage.

At the back of the tablet is a 8.1 megapixel camera with Exmor RS sensor, HDR and 1080p Full HD video recording. A 2 megapixel 1080p front-facer can be found too.

NFC, GPS, Wi-Fi 802.11ac, Bluetooth 4.0, FM Radio and microUSB 2.0 with MHL 3.0 take up the connectivity responsibilities. The tablet’s speakers are also moved to the front to form a new S-Force Surround Sound setup. For all the gamers out there, Sony is bringing official controller support for both its Z2 products.

The Z2 tablet runs on Android 4.4.2 KitKat. A 6,000 mAh battery powers the tablet up. Just like the Xperia Z2, Sony will bundle this tablet along with a noise-isolating headphone too.

Pricing details are unknown as of now but considering the Wi-Fi version of the original tablet went up on retail for $499, we don’t think pricing for this one will be much different. The Z2 tablet will be available in either Black or White.