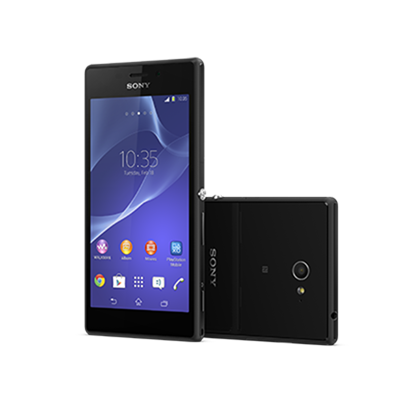 While Sony was quite busy with announcing flagships, it certainly didn’t forget the lower-end phones either. The Xperia M2 is a mid-range phone which costs $300 (about 31,500 PKR) and comes with a 4.8″ display, an 8 megapixel camera and a quad-core processor.

The 4.8″ display comes with qHD resolution, which makes it the largest phone of its class. The panel is also scratch-resistant.

Under the hood, you get a 1.2Ghz Snapdragon 400 processor with four Cortex A7 cores. Alongside it is 1 GB worth RAM and 8 GB internal storage, expandable via microSD.

Towards the back is an 8 megapixel Exmor RS camera with LED Flash and HDR. Quite surprising for its price bracket is the fact that it shoots Full HD 1080p videos. Its pleasing indeed to see Sony bringing its imaging prowess further down the chain.

Connectivity options include 3G , NFC, Bluetooth 4.0, Wi-Fi and GPS. The OS running on the phone is Android 4.3 Jelly Bean, which should be upgraded later onwards. Battery capacity is set at 2,300 mAh.

The phone will be released in Q2 probably. Given its price-tag, and the mouth-watering features, it can surely give established brands a run for their money.