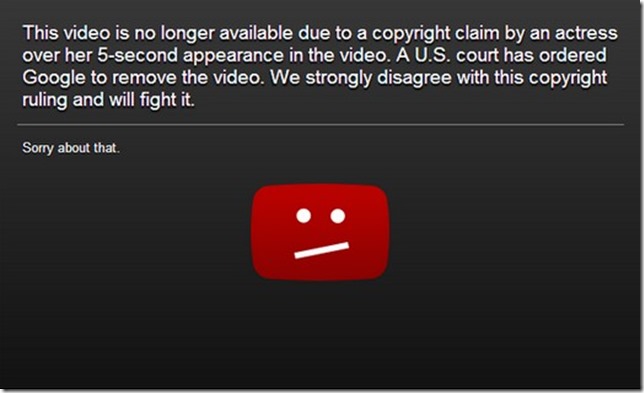 Google has finally removed the anti-Islamic video from YouTube after a US court ordered the removal of the movie.

The Ministry of Information Technology (MoIT) as well as Pakistan Telecommunication Authority (PTA) has confirmed the removal of movie ‘Innocence of Muslims’ and around 1,000 other links from its website.

The removal of these blasphemous and anti-Islam videos should surely pave the way for reopening of YouTube services in Pakistan. However, it is worth mentioning here that Google has vowed to challenge the ruling of US court.

If the government decides to reopen YouTube in the country it must also devise a policy in case Google wins the case.

It will be a welcome sign to see the opening of YouTube before the expected 3G and 4G auction in the coming months.

Video streaming is a major chunk of data consumption over 3G and 4G around the world; with the auction expected to take place in just a few weeks time now, mobile users will definitely hail the reopening of YouTube services in the country.

YouTube has been banned in Pakistan since September 2012 when an anti-Islamic film ‘Innocence of Muslims’ sparked worldwide protests. On Wednesday this week a US court ordered the removal of the film after a lawsuit by an actress who claimed she was tricked into appearing in the blasphemous film.

The Minister of State for IT Ms. Anusha Rehman, the Secretary IT Akhalque Ahmed Tarar, and Chairman PTA Dr Ismail Shah are all currently abroad. Upon their arrival back to Pakistan we can expect some more development in this story.