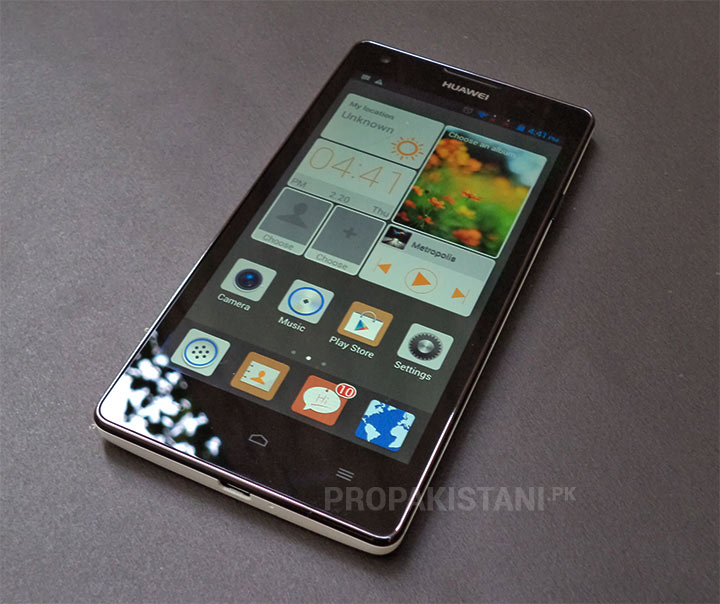 Huawei introduced its much awaited Ascend G700 smartphone last month in Pakistan and that too at a very attractive price, i.e. Rs. 25,500.

Just like its sibling, G610, Ascend G700 is also a Dual-SIM smartphone. It comes with a premium design that packs pretty nice hardware in it.

Before we go ahead, just to mention, we had posted the un-boxing & hands-on video of Ascend G700 last week, which you probably would like to have a look at before reading this review.

Also have a look at Ascend G610‘s if you haven’t already — because we will be comparing them both in below review.

Ascend G700 is fully made of plastic, but it doesn’t feel cheap. The frame of the phone is also made of plastic but it gives a premium metallic look.

It features very similar design to other Huawei smartphones launched this year. This white version of Ascend G700 specifically reminds me of Ascend P1; though Ascend G700 has a removable back. 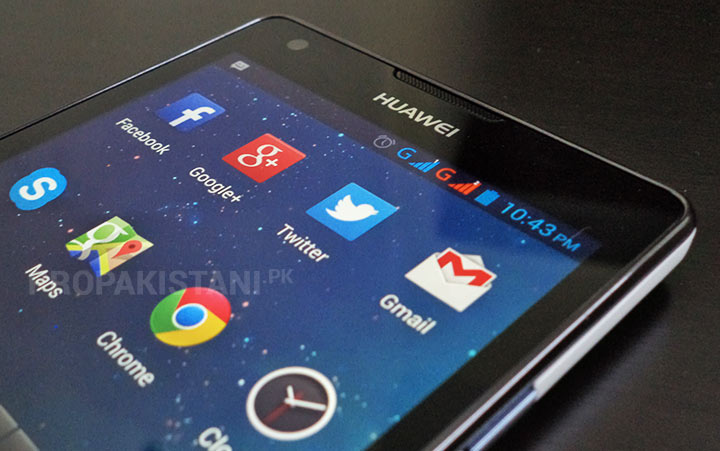 On the front of Ascend G700 there is big 5-inch (Pure Black) IPS LCD with 720p resolution (293ppi). Though it doesn’t feature Gorilla Glass protection but in our tests (putting keys & phone in same pocket, rubbing them gently on the screen) it didn’t catch any scratches. So I guess it’s safe to use it without any protector but a protector would be an added value for sure. 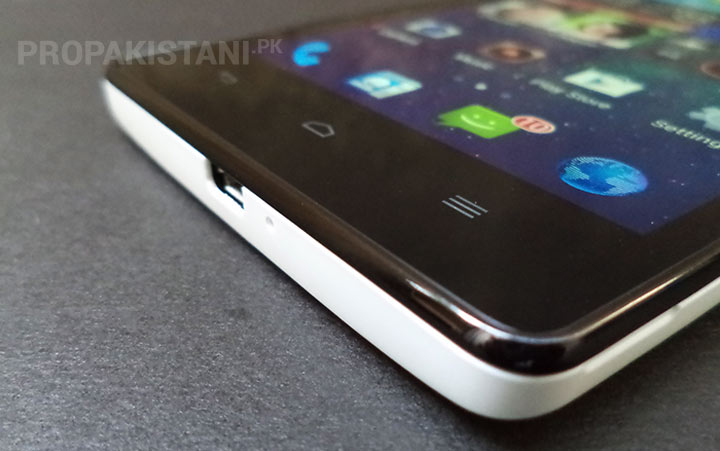 Above the screen there is ear-speaker grille in the middle with Huawei logo beneath it. 1.3-megapixel camera on the left and light sensor with LED notifications light on the right. The regular 3 touch keys are placed below the screen.

The power/unlock keys is placed on the right and volume rocker is on the left.

3.5mm jack is on the top and the bottom features microphone and micro-USB port. 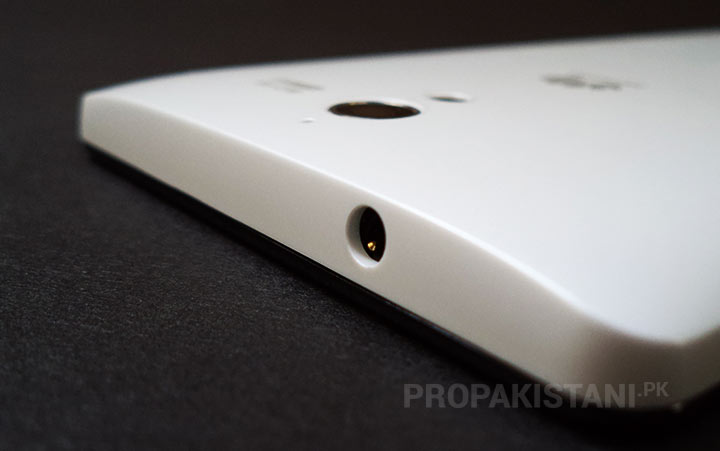 An 8-megapixel camera with noise cancellation mic on top and LED flash light on bottom are located on the back.

The speaker grille is on left bottom. We have got the white version of the phone, the black version is totally black, but white one has a silver-white back and matching volume rocker. 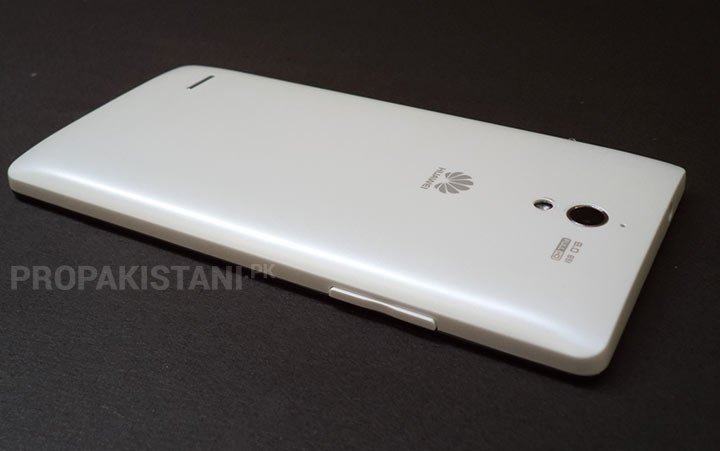 Removing the back plate reveals two slots for normal (Mini) SIM cards and micro-SD Card slot in between them, along with Battery compartment.

The good news is if you have micro-SIMs you don’t need any adapter as the slots can take them too. 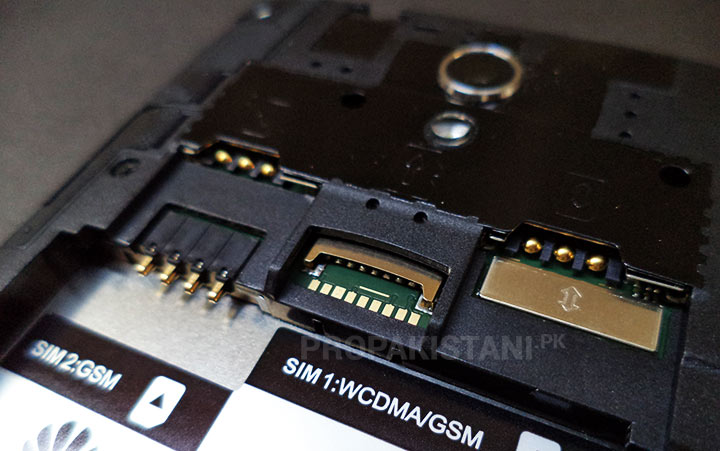 The overall build quality and design looks very premium, we haven’t checked but the plastic seems to be durable and can survive any accidental drops.

Ascend G700 was announced last year, so it doesn’t come with a latest version of Android or EMUI. Just like its younger brother G610, this phone runs on Android 4.2.1 Jelly Bean OS with EMUI 1.6 on top of it. 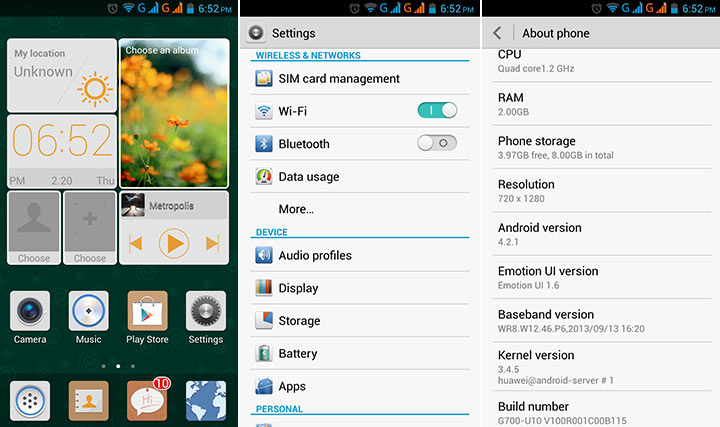 You might already know about EMUI, but to give new readers an idea; EMUI has no app drawer, which means all your apps on the homescreens are organized in folders. You can also add widgets, change transitions and some other gimmicky stuff.

It would take pro users a while to get used to this interface, but for newbies it is very easy & user friendly. Just in case if you don’t like you can always install any other launcher that will replace EMUI.

This version of EMUI doesn’t feature Huawei toggles, which are now replaced with stock and you can’t edit them. Also the permission and power manager apps are missing, those were first introduced with Huawei Mate (EMUI 1.5).

Other settings include Scheduled power off/on, SIM card management, SD card as internal storage and ability to move applications to the memory card.

An online manual of this phone states that it support USB OTG, but the device we had for review didn’t offer this feature. May be rooting and editing some system files could enable it, but it will void the phone warranty so we won’t recommend it.

Ascend G700 is packed with MediaTek MT6589 quad-core processor, PowerVR SGX 544MP GPU and 2GB of RAM. These specifications are not the best or latest but considering the low price of this phone, you can’t get this any better.

The phone is equipped with 8GB internal memory (6GB user available) and can take a micro-SD card upto 32GB. You can also use the SD card as primary storage. 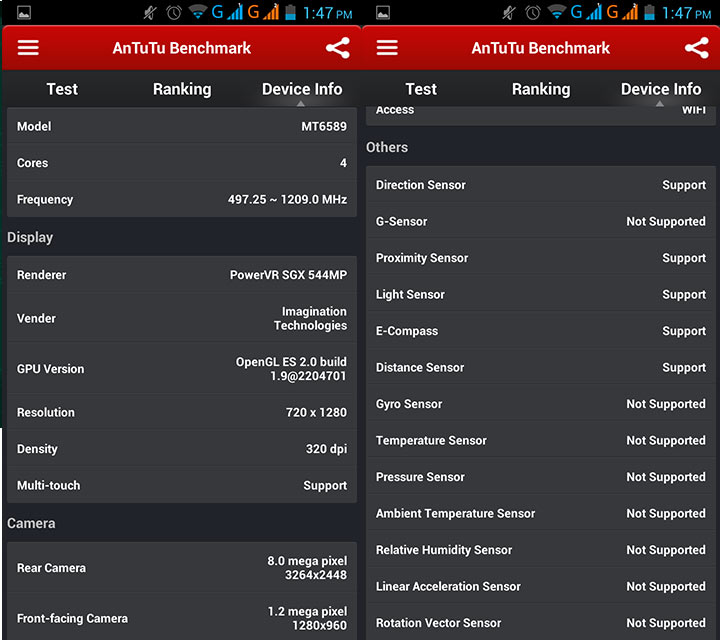 The performance of this phone is somewhat similar to G610, but the additional RAM comes handy during multitasking.

You won’t feel any lag while scrolling through homescreens, browsing websites, running multiple applications at the same time.

You can also play all the resource hungry 3D games, though graphics rendering won’t be good as high end devices but the experience is lag free. 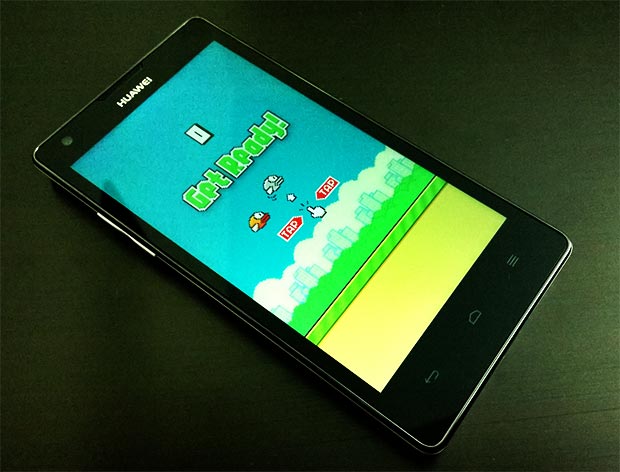 You can watch 1080p videos, make VoIP calls and do video conferencing via Skype. The loudspeaker quality of this phone is also a little better and louder as compared to previous models.

Regular calls and texting is also flawless with good signal reception as well as the Wireless connectivity. If you have some trouble with Wi-Fi, make sure your router is using channels between 1-9. 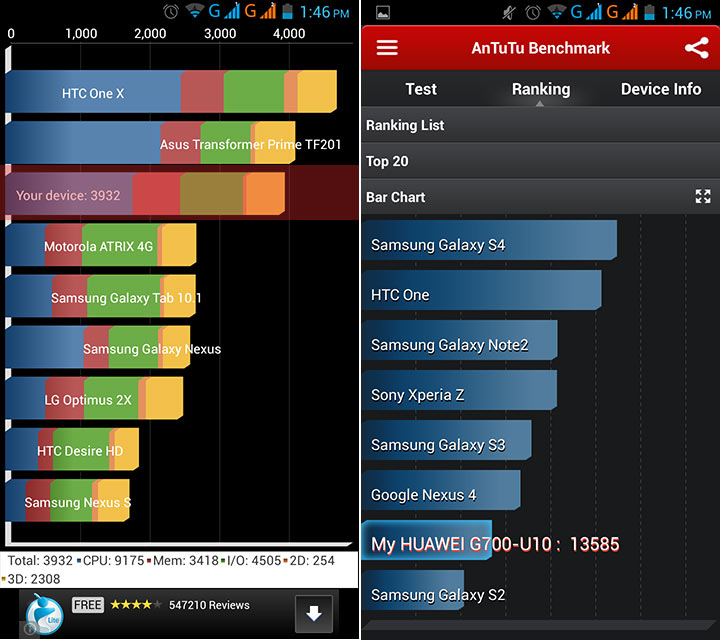 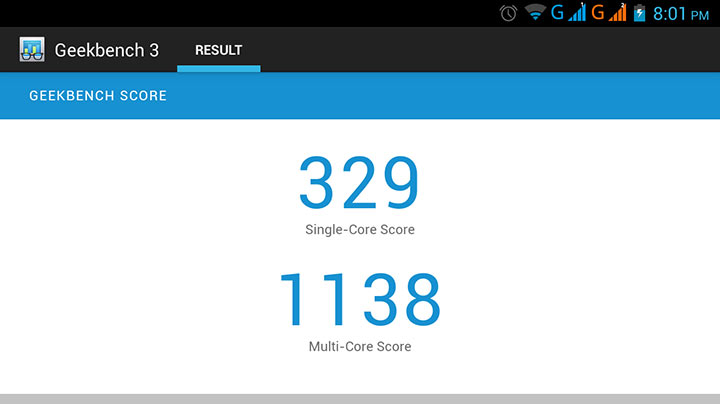 Ascend G700 is packed with a 2150mAh battery which seems to be quite adequate for average users. In our battery tests you can easily spend a day on this phone with heavy usage, which includes continuous use of Wi-Fi, Taking 10-15 camera shots with flash light, Texting and playing resource hungry games for at least 3 hours. 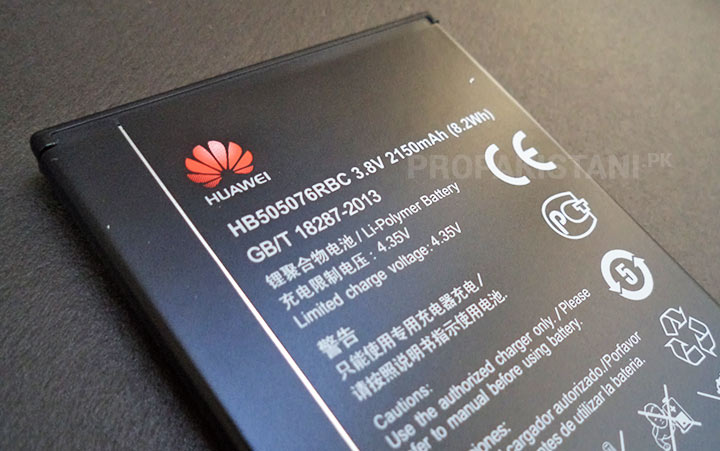 The battery takes almost 2.5 hours to charge and with a careful usage you can even extend it to 2 or 3 days. (Just make sure to kill background apps and adjust screen brightness to the minimum).

Ascend G700 is equipped with a primary 8-megapixel BSI camera, which helps to capture more light and produce better images in the unfavourable lighting conditions.

The camera is also equipped with LED flash, which doubles as an emergency light you can use from dedicated torch application. 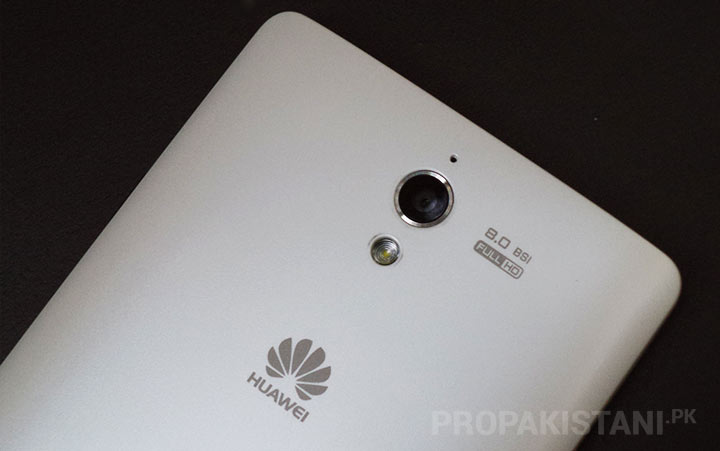 The camera handles varying colors, textures and different light sources very well. Its interface is the same as G610 but image processing is much faster and you can quickly take the next image.

You can play with different in-built filters and effects to enhance your photos or you can edit them later and apply some Instagram like effects.

The default aspect ratio is 16:9 which takes 6-megapixels shots but you can change it to the most common 4:3 ratio to get 8-megapixel photos.

The average file size of 8-megapixel photos is around 2MB. 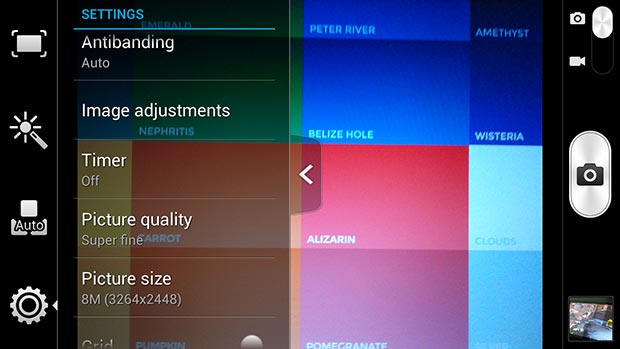 The primary camera can also record full HD 1080p videos (16:9) @ 30fps. The quality of the video also remains good. To record videos you have switch to video mode from the top right button and start the recording. There are not much settings to play with as compared to the still camera and you can’t take images while recording video.

The front facing 1.3-megapixel camera is a major improvement from G610 and produces sharp images, the quality during video calls is also satisfactory. You can also record 720p videos from the front camera.

Here are some of the sample images taken with the primary camera:

This phone is available for a price of Rs. 25,500 all over Pakistan with one year warranty of Airlink Communication.

Currently Ascend G700 is sold in two colors; full black & with white back. The white one is our favorite and we recommend it to you as compared to full black. 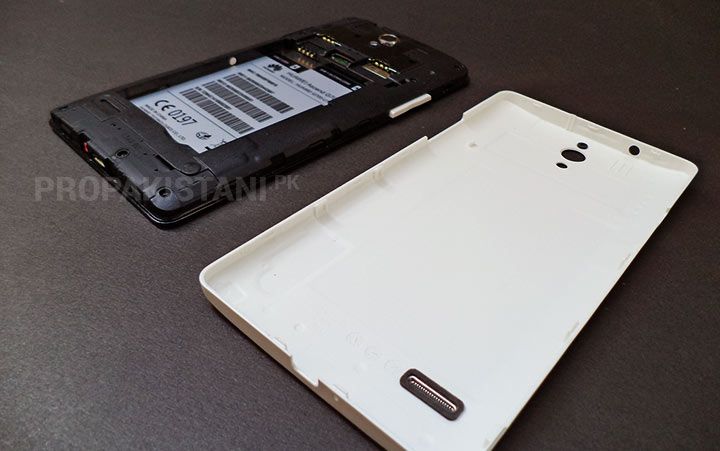 Ascend G610 was the most popular Huawei phone in Pakistan to date, but I guess soon G700 will cross the mark.

Huawei phones are getting popular because company has understood the needs of Pakistani market, where people demand smartphones with decent hardware at an affordable price.

It merits mentioning here that Huawei also produced a localized TVC for this phone. 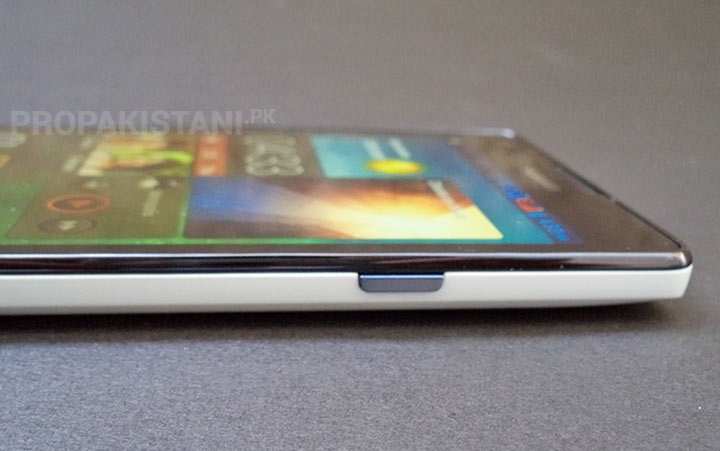 Do share your opinion in the comments section below and if you have any questions regarding this phone feel free to ask us.