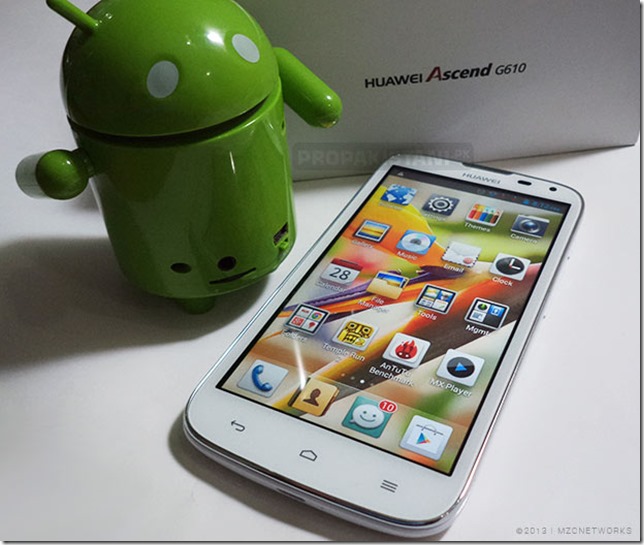 The good news is that Ascend G610 is now available in all major cities of Pakistan, at a price-tag of Rs. 20,000 with one year Warranty of Airlink Communication.

Lets get straight to the un-boxing video first:

Before we move on dissect the Huawei Ascend G610, here are the specs: 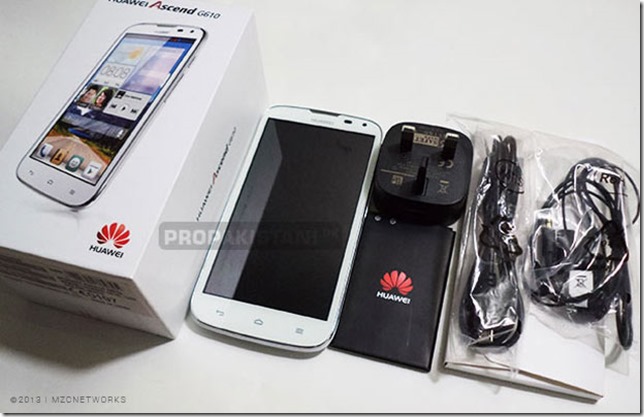 The first thing you will notice about Ascend G610 is that its big, though its not at all categorized as phablet but still its huge in size. The well-crafted phone body is entirely made of plastic and if I may speak frankly, despite the low price-tag, the Ascend G610 will give you a premium feel. 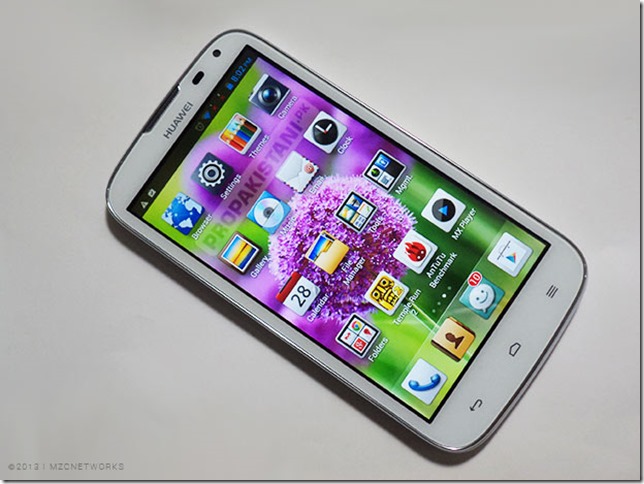 Huawei Ascend G610 dimensions are 142mm x 73.6mm and its 9.9mm thick, though a clever design on the back panel gives a lot thinner feel. The phone weighs 170 grams, which is heavier than any other Huawei phone except Ascend Mate.

The front side is dominated with a large 5-inch IPS LCD. Just in case if you don’t know the IPS screens are known for wider viewing angles.

Ascend G610 offers a Quarter-HD resolution of 960 x 540 pixels (220 ppi pixel density), which is almost similar to Ascend G510. The screen sharpness and color saturation is good but one may not term it as ideal.

The position of ear speaker makes it look like a part of the frame, other than that there are light sensors, notification’s LED and front facing camera along with Huawei logo above the screen. Below the screen we have the usual three touch sensitive keys. 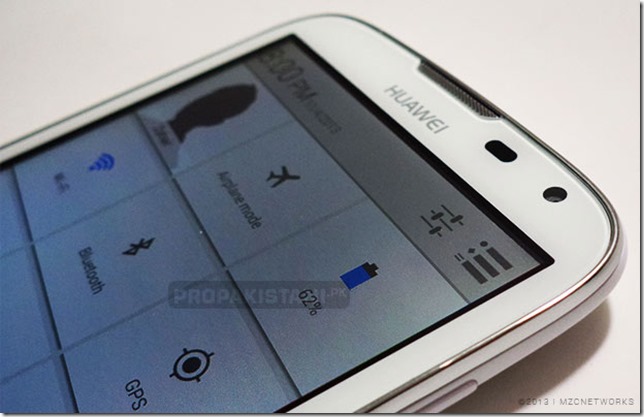 It seems like Huawei is always experimenting with the position of USB port and headphones jack. Ascend G610 has 3.5mm headphones jack on the top and USB port along with mic on the bottom. The right side features power and volume rocker keys. 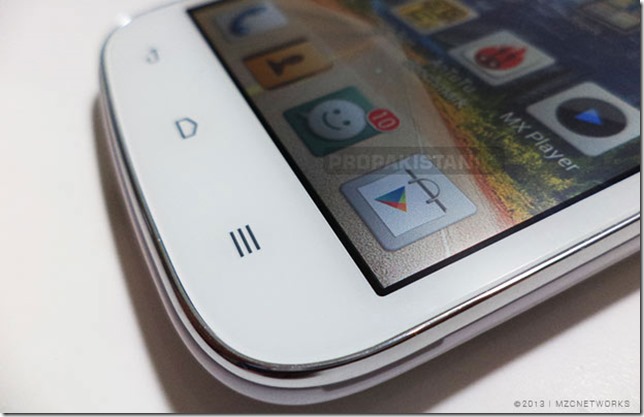 The phone comes in two colors Black and White, I am not sure if the black version has a matte finish but we have got the white one, which has a glossy plastic back plate.

The back features a 5-megapixel auto-focus camera with LED light and Huawei Logo beneath it. The speaker grille is placed on the bottom left. 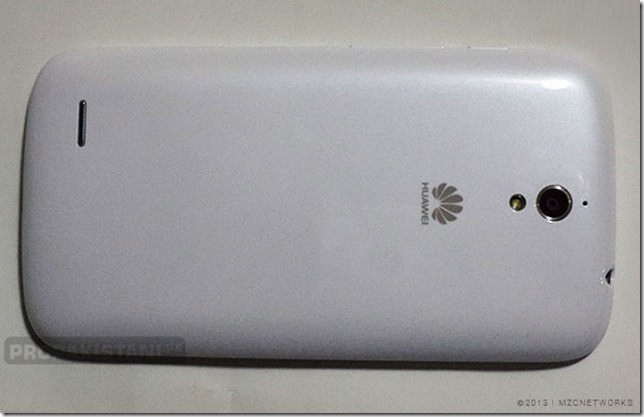 Removing the back plate reveals two slots for normal (Mini) SIM cards and one for micro-SD Card along with Battery compartment. Just like the Ascend G510 the power and volume rocker keys are embedded in the back plate. 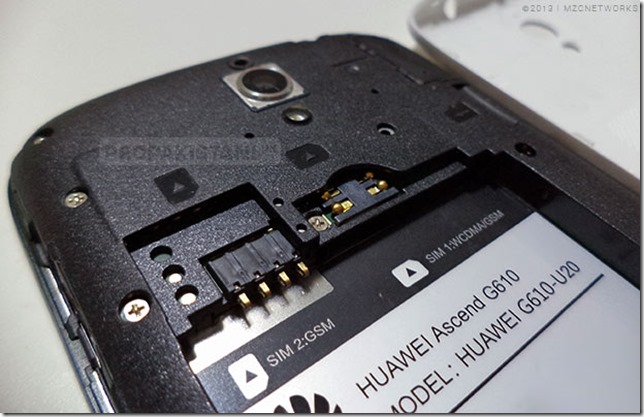 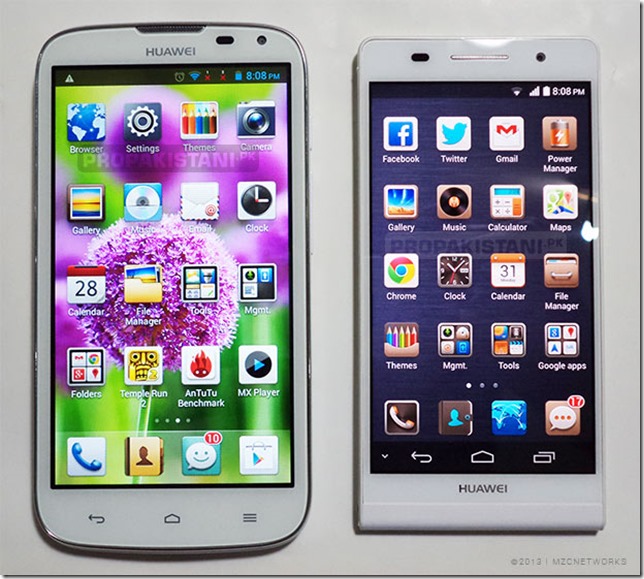 Ascend G610 comes with Android Jelly Bean 4.2.1 out of the box with Huawei EmotionUI on top of it.

If you are new to Android or don’t like the fancy animations and flying/fading app drawers then you will love the EmotionUI. It puts all your apps, widgets and shortcuts on the main screen, you can arrange these items in folders on multiple screens — so its all easy and fun.

I think there’s no need to tell you that you can always install a custom launcher and use a theme of your own taste. 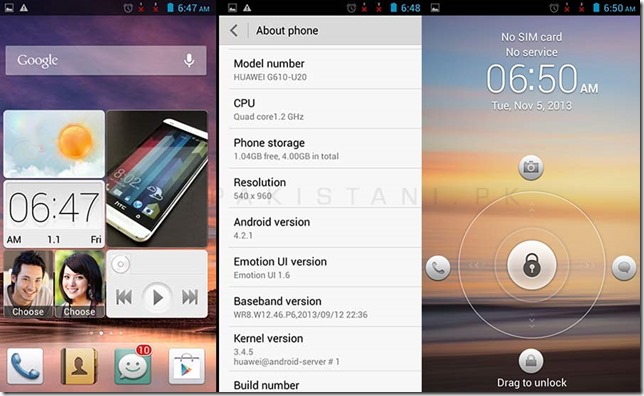 Ascend G610 comes with EmotionUI version 1.6, which is a little different from what we have seen previously on flagship Ascend P6. Of course it adds some SIM management features for Dual-SIM standby. It allows you to assign different tasks to the SIMs, for example you can preset one SIM to be used for calling and other for SMS — you can also set which SIM has to be used for Internet/GPRS or you can set it to “Always Ask” mode.

Calls and SMS made from both SIMs are marked and showed in different colors.

In this version of EmotionUI 1.6, shortcut toggles in the notifications menu are gone, replaced with the stock Android 4.2 shortcuts. It also shows the user icon but won’t allow you to add multiple users. (A feature introduced in Jelly Bean 4.2 that allows you to make different user accounts on a single phone)

Other than the toggles, the Permissions Manager is also missing, which used to allow the users to restrict applications to access your contacts, SMS, location and Internet. It was a very handy and much needed application — I wonder why Huawei has removed this application. I have tried installing the app myself but it doesn’t seem to work as intended.

The only notable addition is the ON/OFF schedule which allows you to set a time to turn off the phone automatically and then boots up at a set time. (Probably to save battery and have a peaceful sleep at night)

Huawei Ascend G610 is powered by Huawei’s HiSilicon quad-core SoC clocked at 1.2GHz with 1GB of RAM. You won’t feel any lag while scrolling the homescreens, browsing websites, running multiple applications at the same time.

You may encounter a little lag while playing some resource hungry games. Also keep in mind that the phone Internal memory is very limited so there are chances that you might not be able to install large-sized games/apps.

Considering its specifications the phone provides satisfactory results in the benchmarks, a screenshot of different benchmarks is attached below. 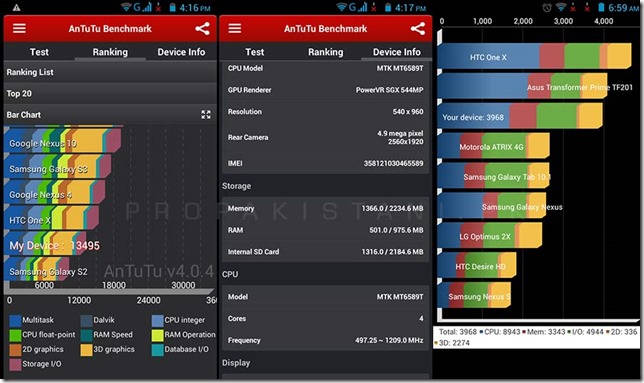 The phone can run HD videos and VoIP applications like Skype and Viber works just fine. The regular calls and texting is also flawless and you get good signal reception as well as the the Wireless connectivity.

Ascend G610 is packed with a 2150mAh battery which seems to be quite adequate for this phone on the paper but actual performance depends upon your usage. The battery lasts for almost two days after a full charge after normal usage and the standby time is remarkable. 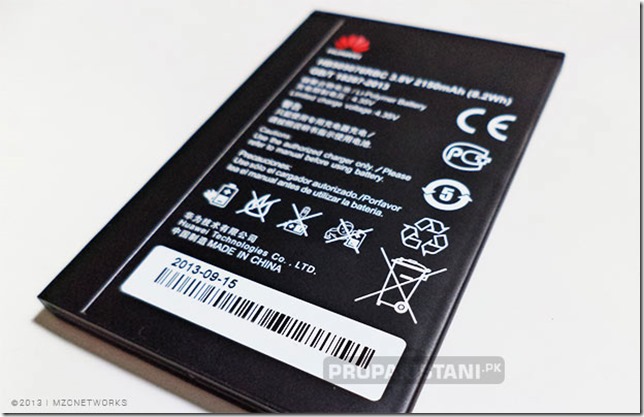 The phone settings offer three different power modes as well as a battery saver application, so if you are low on battery you can optimize its usage by turning off unnecessary features and killing resource hungry apps.

Ascend G610 has a 5-megapixel camera with LED flash on the back and front-facing 0.3-megapixel camera. The primary camera performance is satisfactory, it handles varying colors, textures and light sources well.

The camera, as expected, struggled in low lights, however, performs great during day light. It can record videos in 720p resolution. The phone features an older version of Camera application and I would prefer the one found in Ascend P6 as it was much easier.

On the other hand the front facing camera performance is disappointing, The colors are washed out while image quality is not good as well. This might be a software issue, but its more likely due to cheap camera hardware.

Just like the previous models, you can use the Camera LED as a torch in case of emergency with a dedicated torch application. 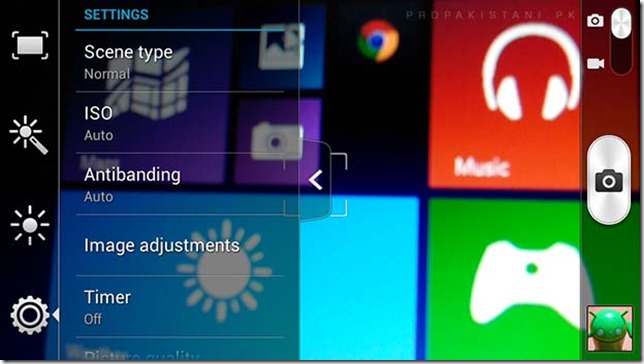 As compared to other Dual-SIM smartphones in the same price range (Rs. 16,000 to Rs. 24,000), Huawei Ascend G610 offers a better build quality and a smooth performance on a huge screen. It offers offers sharp colors and wide viewing angle — although it lacks a little in the Camera department but still Ascend G610 can easily leave an impression.

I think Huawei has finally made a wise decision to provide customers what they want at a reasonable price. Customers buying Ascend G610 will be happy to have found an Android device with dual SIM capability without compromising with the quality and performance.

When it comes to Dual-SIM smartphones, usually we have two choices, QMobile and Samsung — The problem with QMobile is that their handsets are of poor quality and the low RAM, which creates countless troubles.

Samsung phones, on the other hands, have good build quality but in this price range all their devices come with tiny screens and outdated hardware/software.

Personally I like this device, but to grab the attention of masses — Huawei will have to drop the price a little (by 2K or around) and Introduce one or two more Dual SIM smartphones, may be one more high end device and a low end smartphone will make a perfect scenario.

Do share your thoughts in the comments below, or ask us any questions if you have.