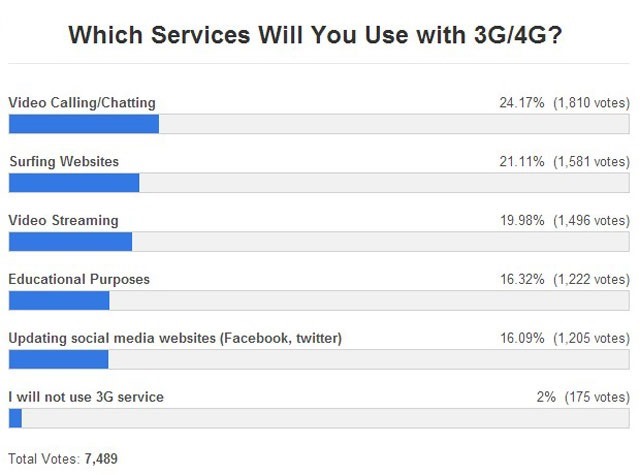 A recent survey conducted by ProPakistani has revealed the priorities of Pakistan’s mobile users, once the 3G/4G services will be made available in the country.

The survey asked users as to which services they will use with 3G/4G; while giving them different options to choose from.

As of today (18th April 2014), a total of 7,489 users participated in the survey out of which the highest votes, 1,810 (24.17%), were given to Video Calling/Chatting. With a high number of Pakistani’s either working or studying abroad, it seems natural that a lot of our users are looking to avail 3G/4G service to connect with their loved ones.

Even otherwise, due to very social nature of our nation, Video Calling/Chatting is likely to remain the top usage on next-gen services.

Even though there are proxies available for using YouTube, and other video streaming platforms are available, we still believe that a ban on YouTube played a role in placing video streaming on the number third spot in our survey.

It was refreshing to see that 1,222 (16.32%) voters said they will be using the service for educational purposes.

Considering the amount of social media activity amongst Pakistan’s smartphone users, it is a surprising revelation to see that more users voted that they will use these services for educational purposes as compared to updating social media websites, which received 1,205 (16.09%) votes.

Interestingly, albeit not surprisingly, 174 (2.34%) users suggested that they will not consider using the 3G service even after its availability in Pakistan.

The auction process has already begun, and we are just a few days away from the auction date, the 23rd of April 2014.

Pakistan’s telecom industry is ushering into a new era, lets hope that the country’s telecom sector can continue to prosper; and we as mobile users receive the ultimate benefits of this growth.