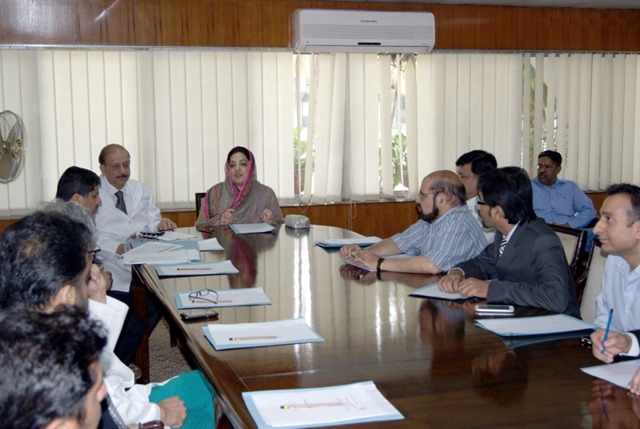 The meeting was chaired by Minister of State for IT & Telecom, Mrs Anusha Rahman.

It was explained that presently the core software modules of HMIS application have been successfully implemented and in use by the staff of SZH, Lahore and the remaining software modules are developed and their implementation is in progress.

The training has been imparted to the most of hospital staff while the training roaster for the remaining staff has been developed.

It merits mentioning here that this PSDP project was originally approved by DDWP on 28th of October, 2005. However, in the past, minimal progress was made on the said project.

Since August 2013, significant progress has been made on the said project. In this regard, the present Government has given high priority to e-Government particularly e-health to ensure efficiency, effectiveness, transparency, public facilitation and to promote less paper environment in the public sector.

The Minister was pleased with the progress made so far on the project by the key stakeholders and expected that the project will be successfully implemented in SZH as a model HMIS application in stipulated period of time.

The HMIS application will be replicated at other public sector hospitals in phased manner. The Minister directed that joint efforts would be required to overcome the barriers regarding the said implementation of HMIS application at SZH.

She further stated that the  system will definitely bring efficiency by digitizing the patient’s medical record, however, focus may also be given on the facilitation of the patients, particularly to mitigate the patients queuing issue by creating efficient and effective system.