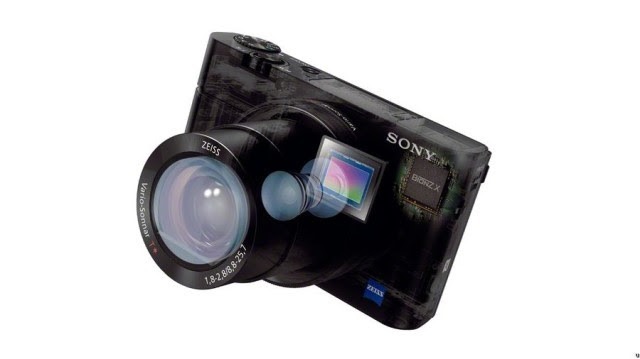 Sony’s best point-and-shoot camera just got even better. Few competitors have been able to challenge Sony’s position in the compact camera market after it announced the original RX-100 in 2012. Now, the company has upped its game for the third time and made what is already a great camera even better.

For starters, with Sony’s latest RX100 III  you get the same 20.9 megapixel CMOS sensor but the RX100 III also has a new Bionz X image processor, taken from the A7/A7r and provides better detail and low-light photography. There is also a new 24-70mm lens with f/1.8-2.8 aperture on RX100 III.

You can also shoot them in the traditional AVCHD and MP4 formats Of course, for such stuff, you’ll need a large and fast memory card and Sony recommends you use one of SDXC format.

For connectivity, RX100 III camera will have NFC, Wi-Fi, microUSB 2.0 and microHDMI. You’ll be able to get apps for it too.

What is unarguably the biggest change though is the built-in 1440k-dot OLED EVF on Sony RX100 III. In the past iterations, if you wanted a viewfinder, you had to buy it separately which can cost a few hundred dollars easily. How Sony has managed to fit one into such a compact design is beyond our imagination.

Another big addition is the LCD, which now tilts all to the way to 180 degrees, meaning you’ll find it easier to take selfies.

No one expects Sony’s products to be cheap and this isn’t either. The RX100 III will cost $799.99. The previous RX100 II and the original shooter will cost $649 and $499 respectively. That’s not cheap but you’ll never regret wasting your money if you’re into photography.