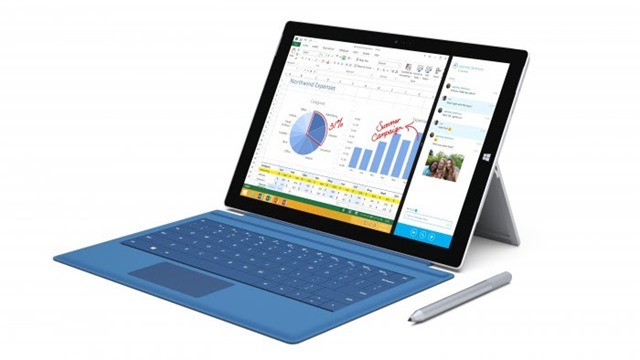 It’s amazing how quickly Microsoft has updated the Surface Pro. The last iteration came only in October and while it wasn’t a bad effort, the resultant tablet was still bulky and inconvenient. This and few more things were quickly addressed by Microsoft with this new Surface Pro 3.

The new display of the Surface Pro 3 is more advanced in so many ways. It is larger, for one, standing at 12″ ClearType with 2160 x 1440 resolution. It also has a new 3:2 aspect ratio which should make portrait usage better.

The kickstand on Surface Pro 3 can also tilt all the way up to 150 degrees, meaning that you can work with the device in a variety of modes. The type cover features a much, much larger trackpad, and can magnetically attach to the bottom of the screen making typing more convenient on Surface Pro 3.

Beneath the display lies a wide range of hardware. Processing power of Surface Pro 3 starts from Intel Core i3 to Intel Core i7 and from just 64 GB worth storage to 512 GBs, all being expandable.

The design of the Surface Pro 3 has seen major changes too. While the last tablet was quite thick, Surface Pro 3 is just has a 9.1mm waistline and is lighter than a MacBook Air. The fan ridge has disappeared too, and while there is a fan, you won’t notice it. Still, it is not prone to shattering, as Microsoft demonstrated in its demo by dropping the Surface Pro from a height of about 6 feet.

There is also an external dock which can connect to a 4K display, meaning there still is a big punch under the hood. The Start Button has also been moved to the side, putting more emphasis on portrait use.

The Surface Pro 3 features a new pen which Microsoft says is meant more to resemble a real pen rather than a stylus. A note-taking app can be launched directly from sleep mode by a push of a button. Apps like Photoshop will be compatible while the pen itself can attach to either the tablet or the keyboard covers.

Battery life is also quoted at being 9 hours. The OS running will be Windows 8.1 while two 5 megapixel cameras have also been added. Connectivity options include USB 3.0, mini Display and microSD.

The new Type Cover costs $130 while the Surface Pen will retail for $50.

With the new Surface, Microsoft is trying to rectify a lot of fundamental problems found in the original models. How much it has succeeded remains to be seen but on the surface, it looks like it has.