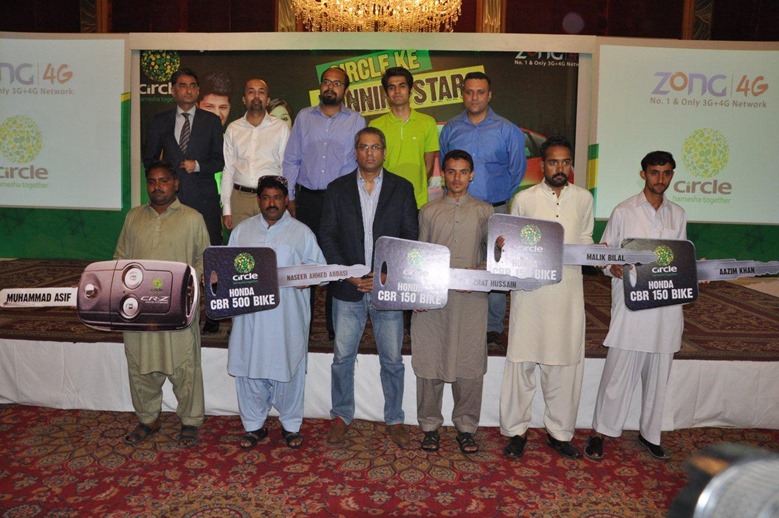 Zong today announced that it has concluded its “Zong Circle” Usage Promotion prize distribution by awarding the winners at a recently held press conference.

The campaign began on 10th February, 2014 and ran till 10th April, 2014, targeted at existing and new customers who activated the Circle Usage Promotion.

“While it is important to ensure our customers have the best service experience, it is also important that our valued customers are rewarded for their loyalty. After the recent success of our Circle Heavy Bike Campaign and the Circle Usage Promo, Zong has announced a promo where a lucky winner will win a Mercedes simply by buying a new Zong SIM or porting onto the Zong network and recharge Rs.200”

The top management at Zong distributed the prizes to 5 lucky winners.

The highlight of the occasion was when Mr. Muhammad Asif from Nawabshah was handed over the keys to Pakistan’s first Hybrid sports car, Honda CRZ. Mr. Naseer Ahmed Abbasi (Karachi) the keys for the Honda CBR500 bikes, while Mr. Aazim Khan (Manshera), Mr.Malik Bilal (Gujrat) and Mr. Hazrat Hussain (Karachi) were awarded the Honda CBR150 bikes at the press conference.

Zong Circle is designed especially for the youth of the nation and includes very affordable service charges, a fast internet connection and many other exciting add ons. The ‘Zong Circle Usage Campaign’ was the last promotional campaign from Circle that builds upon several other successful promotions concluded in the past for the young Circle users.