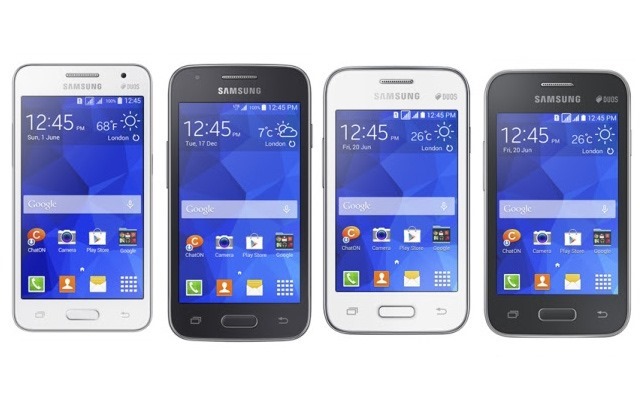 After Motorola had thrown its cards, it’s now time for Samsung to show its skills this summer with its new budget line-up.

The 4 phones: Star 2, Young 2, Ace 4 and Core II – will cater to the needs of a wide range of users, run Android 4.4.2 KitKat out-of-the-box with the company’s TouchWiz Essence UI on top.

Further, the Galaxy Core II, Galaxy Star 2, and Galaxy Young 2 are dual-SIM devices, while the Galaxy Ace 4 is a single SIM device and has been launched in 3G and LTE variants and will also be more widely available than rivals such as the Moto G.

The South Korean consumer electronics giant, as of now, has not revealed any pricing or availability details of the four smartphones.

Inspite of that fancy name, the Star 2 is the most humble offering, having a 3.5″ HVGA display at the front and a single-core 1Ghz processor. Also at home are 512 MB RAM and a 2 megapixel camera at the back, to remind you of 2010.

Storage is set at 4 GB expandable. A 1,300 mAh battery powers it up. Dual SIM compatibility is also on-board.

The Young 2 is the successor to the popular Galaxy Young. Packing a larger 3.5″ HVGA display, the phone retains the 1Ghz processor and 512 MB RAM of its younger sibling.

A 3mp camera can be found on the back. 3G, Bluetooth 4.0 and Dual SIM compatibility are onboard, as is the 4 GB expandable storage and a 1,300 mAh battery.

The fourth iteration of Samsung’s popular phone finally brings notable specs, packing a 4″ display with 480 x 800 res. at the front. Under the hood sits a 1.2Ghz dual-core processor with 1 GB RAM and 4 GB expandable storage.

At the back is a 5 megapixel with 720p video, along with a VGA shooter at the front. Connectivity modes include Bluetooth 4.0 and, more importantly, 4G LTE.

At the back lies with a 5 megapixel camera with 480p video, as is the VGA shooter at the front. It has skipped 4G but comes with a 2,000 mAh battery.

Needless to say, the line-up is truly puzzling, hence, of you have your heart set on a phone, take one after judging your needs and wants. You’ll (still) be better off with the Moto G or E, though.