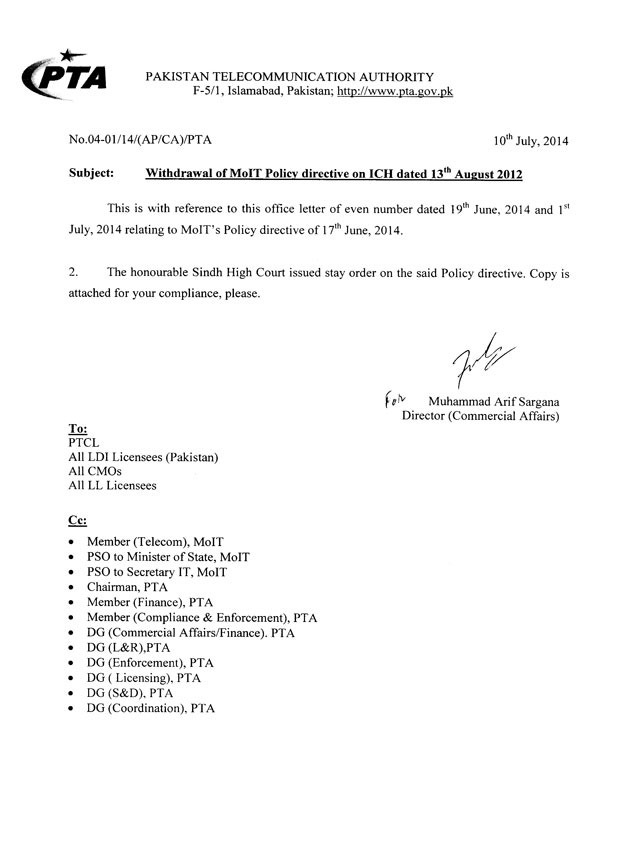 Long Distance and International (LDI) operators were naturally not happy (for apparent reasons) with MoIT’s policy directive according to which ICH was suppose to get withdrawn from August 1st, 2014.

Consequently, Redtone, ADG, Circle Net and Telecard moved to Sindh High Court with plea that Ministry of IT and Telecom issued the directive without consulting the LDI operators and pleaded that directive should be reversed.

Sindh High Court, as one would expect, has straight away restrained the government to not to implement the directive till further instructions plus ministry is asked to not to take any coercive action against the petitioner.

Court has issued notices to MoIT and PTA for further hearing on the case.

PTA, in response, has asked the LDI operators to forget any previous communication concerning the withdrawal of ICH and that they should comply with Sindh High Court’s ruling.

For those who are living abroad and who call their FnF in Pakistan, the likely decrement in rates for international calls to Pakistan may not happen as planned. They may have to keep paying extra dollars for calls to Pakistan till Sindh high Court concludes anything.

For now these Pakistanis living abroad may hope that Sindh High Court will rule the case in favour of MoIT.

But even if case is ruled in favour of MoIT, don’t expect any mercy from LDI operators. They have enough pockets to move to Supreme Court against the directive to buy few more months.

Below is the letter that PTA sent to LDI operators to not to withdraw ICH.