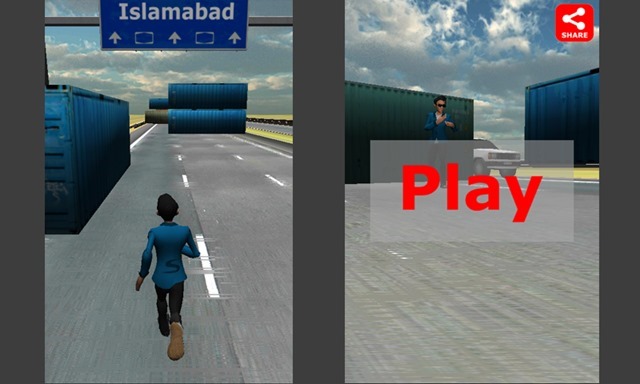 It’s clear that the thriving game developer community of Pakistan is also diplomatic; it tries to capitalise from every on-going national event. Not that we are complaining.

How can a possible revolution possibly get through? Seems like a genuine opportunity to begin with, which it is.

In a new game on Android called Container Run, you are shown running away from containers. You play as a character described as “Stylish Mr. Khan”, who is running towards Islamabad. Sounds familiar, we felt the same too.

Rules are simple: run as far away as possible and avoid containers at all costs. You tilt the display to navigate Mr. Khan and tap to jump. If you’ve played Temple Run you know what I’m rambling about.

At first I thought you could run on top of containers too, but I was wrong. The game is rudimentary to say the least. There’s only one button on the main menu: Play. Not even a single setting to mess around with.

You die with the following of the same animation too. But the biggest problem for me is that there isn’t even a point counter. You can’t make or compare high scores here. Its disappointing because apart from pure curiosity, there’s no reason to check out Container Run at all.

But that’s not the point actually. Apps such as these portray the lighter side of ongoing events. But Container Run seems like such a rushed job that I’m wondering how the heck did it even make through the Play Store.

Bombardment of ads with every death make it even messier.

It is the kind of game which would make the developers of “Angry Imran” or even “Gullu Butt” proud. On an ending note, the Stylish Mr. Khan is anything but like the person that it portrays. Apart from the stubbornness, of course!

Just to add, Pakistani developers who want to capitalize these real-life happenings in a quick way must put some real efforts to reap the most out of such opportunities, and they must not produce extremely rushed, half baked games like the one in question.

If you still want to, you can download “Container Run” from Play Store here.