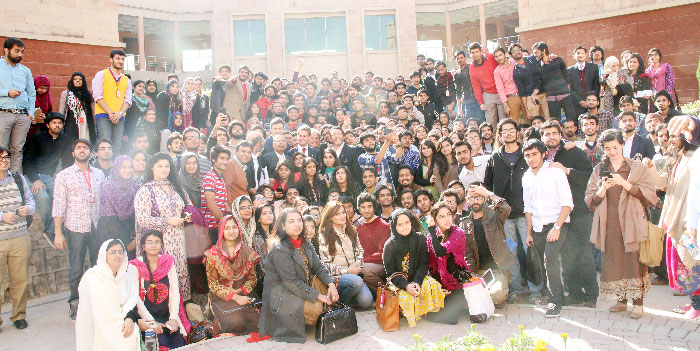 As we reported before, Evan Spiegel, the CEO of Snapchat, visited NUST – SEECS in Islamabad earlier today. The event was organized by Mobilink and Spiegel was accompanied by the co-founder of VimpelCom, the parent company of Mobilink. 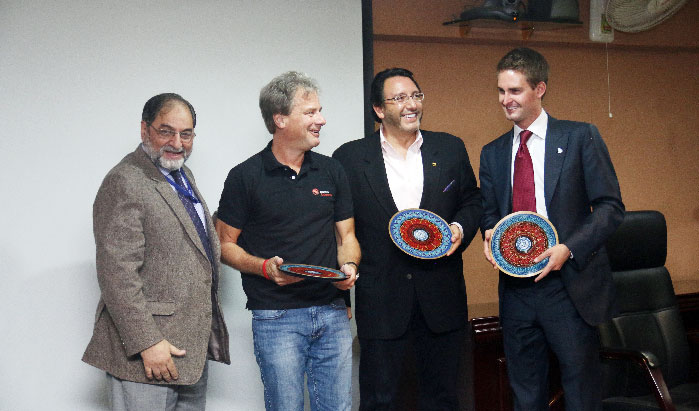 Evan Spiegel, 24, is the brains behind Snapchat, which has more than 100 million monthly users. The app works on an ephemeral messaging idea; users can set a time limit with a message and the message gets deleted off the receiver’s phone and Snapchat servers after that specified time period, thus ensuring security and privacy. Recently, the company was valued at $10 billion by market analysts.

In the talk, Spiegel extensively laid out his background, his history and the series of events that eventually resulted in the birth of Snapchat. He also spent some time discussing the vision and philosophy behind Snapchat, which is a focus on making things as simple as possible. The event provided great insight into how a business worth billions of dollars is built and what it takes to build it.

At the end of the talk, a Q&A session was held in which the audience got a chance to put their questions directly to Spiegel. Here are the transcripts of some of the more interesting ones.

Question. Having started a few failed startups, how did you manage to not lose hope and try again?

Evan Spiegel: We were kind of spoiled since we were in university. We had that big warm safety net and that helped. Being around people who were going through the same thing helped us too and it doesn’t hurt as much when it happens a couple of times.

Question. How are you going to ensure that Snapchat’s vision of making things simple doesn’t get diluted by things like linking your bank account with your Snapchat account?

Evan Spiegel: Great question. Thing is, we have made payments simple. If you want to send money to your friend, it should be as easy as deciding to send it. So if you just draw a dollar sign and write 20, a button lights up. Press it and $20 are sent to your friend. It’s integrated into the app and if you ever feel like things get too complex, call me and we will fix it.

Question: How do you propose entrepreneurs deal with the complete absence of venture capitalists and angel investors in Pakistan?

Evan Spiegel: One thing I have noticed in my travels is that people build their businesses differently and not business is a venture business. For example, our business model only succeeds at scale so we needed a ton of capital to get started and to grow quickly. But there are lots of other businesses that don’t fit the venture model but still manage to leverage all the incredible technologies at our disposal like smartphones.As the cost for starting businesses declines, it will get easier and easier. Once there are one or two mega businesses, venture dollars will come. Venture follows the really large scale companies so at the moment, it seems like a chicken and egg problem.

Question: How is your business worth billions of dollars, how do you justify its value?

Evan Spiegel:. It’s ‘worth’ that amount because that is what someone is willing to pay, if you are talking about simple economic terms. But if you look at our business model and where we will go in a year; it might not show up in Pakistan yet but in the US, we have started rolling out video advertising. However, our model is different.

We just put an option for people who want to watch ads. And as it turns out, a lot of them do because they are curious. So we are respectful of our community and don’t interrupt their user experience and as a result, our new ad unit is working out really well.

Question: What future products do you see for Snapchat?

Evan Spiegel: One of the things I have been studying and thinking a lot about is the media is general. How social media has fundamentally changed the distribution of content on the internet today. For example, these days the fastest story wins. Social media also tends to prioritize things that are sensational.

So the focus is on getting users to click so that media companies can make money. This has destroyed traditional media brands. So if an article crops up online, you don’t really know where it came from. So a lot of work can be done on changing the news distribution on smartphones and that’s what I am going to be working on.