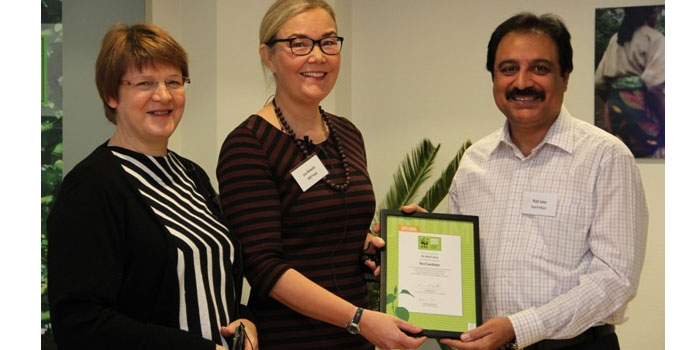 The award was presented by the CEO of WWF Finland Liisa Rohweder and the Head of Green Office Program Helka Julkunen to Wajid Hussain Junejo  of Engro at a ceremony attended by selected companies across the globe in addition to the Green Office employees posted across the globe. It recognized and appreciated the initiatives taken by the Company with respect to the Green Office Initiative and undertaking other concerns to follow such practices, to reduce the environmental burden.

Speaking at the occasion, Liisa Rohweder lauded the role of Pakistani Companies in joining the Green Office network and said:

“I appreciate the role of the Pakistani companies, for working hard and voluntarily working towards saving the planet.’’

She stressed on the need to move forward and progress in this direction and motivate others to play their part in reducing the environmental burden in addition to reducing costs of their businesses.

Engro was appreciated for their novel efforts in converting the head office lighting to LED, placing duplex central printing and reducing the waste generation, hence beating the tough targets assigned by WWF continuously for the past 3 years. This has resulted in reducing the electricity consumption by 42% which is a major factor of carbon dioxide emission, 56% reduction in paper usage, 82% reduction in waste and 44% reduction in carbon footprint against baseline benchmarks.

Engro is an environmentally-aware and a responsible company, and has initiated various programs of action that are ecologically favorable and in connection with the development and sustainability of the environment. Green Office Initiative is one such program, aimed at reducing Carbon Dioxide (CO2) emissions and workplace environmental footprint.

Since its inception, Engro’s Green Office Initiative has advocated a culture of environmental responsibility enabling the workforce to act in eco-efficient and conscious manner in everyday tasks, and has improved environmental awareness in cost-efficient ways.