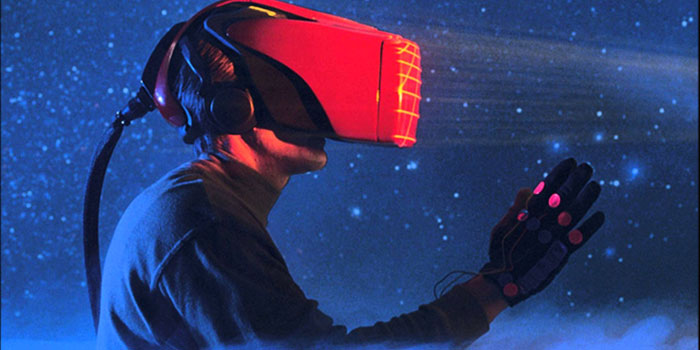 Palmer Luckey, a journalism major at California State University, an avid gamer and technology enthusiast (has a collection of around 50 different virtual reality headsets) started a campaign in 2012 to collect $250,000 to develop and sell 100 VR headsets, named Oculus Rift.

The response was unexpected. He was able to collect $2.4m dollars, a stunning 974% more than his target. Things got even better when Facebook bought his company, Oculus VR, for $2bn in March earlier this year and reignited the VR development that had been on the back-burner since the 80’s.

The Oculus Rift, a Kickstarter project, has helped bring Virtual Reality back to mainstream

According to Palmer, most of the technology that he used had been available since 2008; it was just that no one was really ever interested in harnessing its full potential. That has changed though.  With wearable technology going mass market in 2014 and the waves of excitement created by Palmer’s project amongst video gamers, major players have stepped into VR development.

Samsung’s Gear VR, termed as the Oculus Rift for smartphones (it pairs with Samsung Note4 and uses Oculus software) and Sony’s PS-4 exclusive project Morpheus are in the development phase. There is VRase which works the same way as Samsung Gear VR with iPhones and other Android sets and Google’s do it yourself – cheapest VR headset Google Cardboard.

All major players like Samsung, Microsoft, Sony and Facebook are investing heavily into VR for applications across diverse fields

According to industry experts and video game producers, games for VR headset such as Morpheus and Oculus would be totally different from the ones currently in market. Though these headsets will obviously cater to first person shooters or racing games, but they intend to go beyond that with games that would take you into the depths of the oceans to games that will have you steer a spaceship to Mars. The whole experience of playing a video game will shift with the player now inside the game (virtually!).

As with any other technology Palmer’s critics point to how Kinect failed to deliver once the early adopters gave their verdict. Palmer’s stance is, with Kinect Microsoft was reaching out to video game developers but in Oculus’s case developers both indie and established companies are all up for having virtual reality in their games.  In Palmer’s words, “…they want to be inside their games and they want that for consumers too.”

Virtual Reality is certainly not going to be limited to video games; it is surely going to be a big part of the entertainment industry in the future. Signs are already there with next year’s Sundance Film festival (one of the biggest film festivals in the world) scheduled to showcase Virtual Reality films by big production houses as well as indie production along with VR based displays by various visual artists. There are numerous exciting projects such as the existing 1979 Revolution Game, using VR will provide an immersive experience of being a rebel in Iran during the revolution.

Films or video games, virtual reality is surely going to take the entertainment industry by storm. With development in wearable technology going full steam ahead, coupled with VR things look pretty darn good not only for us gamers and movie buffs but the possibilities are limitless ranging from medicine to new avenues for social media, definitely the stuff of science fiction.