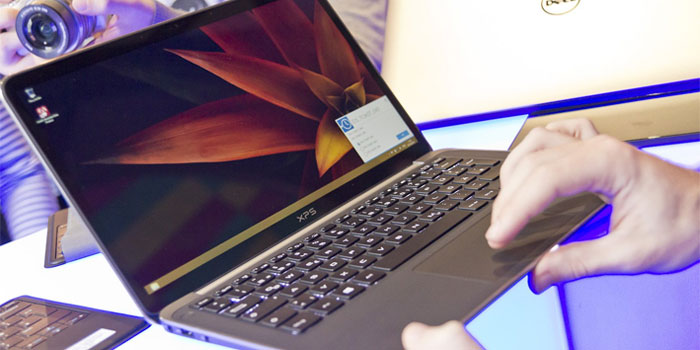 Dell XPS 13 has undoubtedly been one of the best revelations at CES 2015. From the little improvements in display of the last year’s model to premium construction and impressively long battery life, Dell pleasantly surprises one and all with this beauty.

If you thought the previous Dell XPS variant had amazingly small bezel, this one nearly blows out the very existence of what little remained of that bezel. It’s barely noticeable at 5.2mm on the sides and the top of the screen. This leaves users with a lot more screen estate, potentially making the laptop seem as if it belongs in the attire of an 11-inch machine.

Besides the variant with a Full HD display, Dell will offer an optional version with what Dell terms the UltraSharp Quad HD+ Inifinity display. To simplify this for you, the latter sports a 3200×1800 resolution touchscreen display. The term ‘Infinity’ stands for the impressive 400 nits of brightness that this variant possesses. Surely, display features such as that would help Dell take on the mighty Apple Mackbook Air.

Dell XPS 13 is awfully similar to its predecessor in regards to its premium build quality. The carbon fibre and machined aluminum construction not only contributes to that suave look but also keeps the weight considerably less at 2.8 pounds. Thanks again to that edge-to-edge display, the laptop feels significantly compact and easy to carry around.

Dell offers a precision trackpad and also incorporates a glass button. It seems like Dell finally paid heed to Microsoft’s call to implement such trackpads. Afterall, it’s these precision trackpads that offer intuitive features like gresture support and multi-touch with Windows 8.1. The execution by Dell in this matter is superb with top-notch tactile quality. Thus, scrolling and zooming is an absolute treat. The fully backlit chiclet keyboard doesn’t quite match the quality of Mackbook Air’s with shallow key travel and keys on the smaller side. However, it’s a sacrifice many would be willing to put up with. 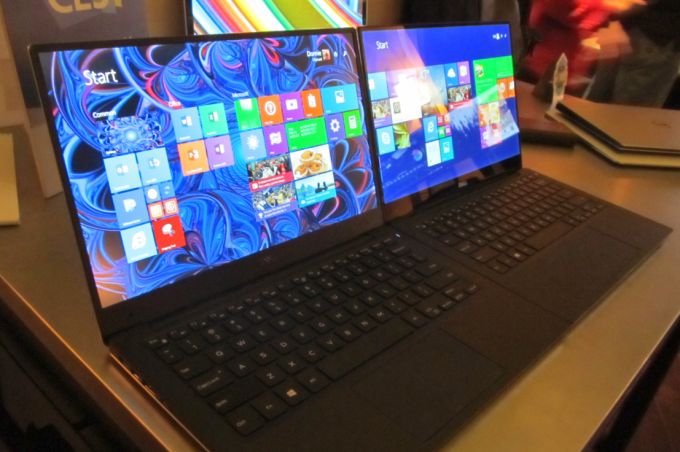 Power under the Hood

Dell has settled with the fresh, fith generation of Intel Core i processors for this lineup. They range from 2.1GHz Core i3 for the entry level model right upto the Core i7 variant. Users have the option to opt for either 4GB or 8GB of RAM. Storage offered is either 128GB SSD with the Full HD versions and 256GB for the one with Quad HD+ display.

Compact size was always going to be a bargain for something, right? Well, it translates in the limited connectivity options. It’s not too bad, though. Dell XPS 13 comes equipped with a Mini DisplayPort, typical audio jacks two USB 3.0 ports and one SD card slot.

Dell XPS 13 of old was a huge disappointment in terms of battery life but that’s bound to change this time around. The latest version promises 15 hours long battery life for the Full HD version. Dell claims that the variant sporting Quad HD+ display will last for a total of 12 hours.

If you feel your laptop might still run short on juice, Dell plans to separately sell a 1,200mAh Power Companion that could add another 6 to 10 hours. Though, it’s unlikely that you’d need the battery extension considering how efficiently the Sharp IGZO display and Intel Broadwell processor manage power on this machine.