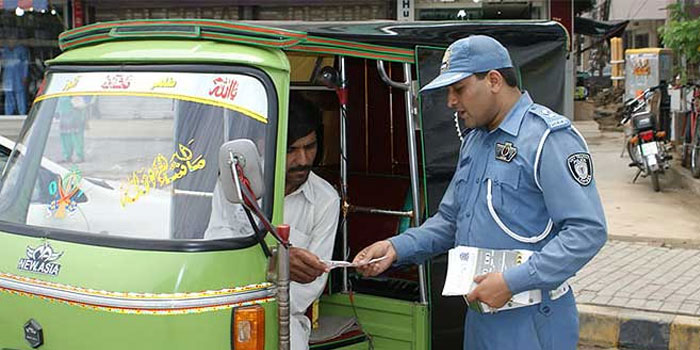 Your next traffic challaan (fine) will be in a digital format.

You heard it right folks. And the City Traffic Police in Lahore is overseeing an experimental project in this regard right now.

This e-traffic fine system aims to make those gaudy paper challaans a thing of history. And the most major reason behind the adoption of this online system is to curb cases of bribery and malpractice, a routine most Pakistanis are all too accustomed to seeing on a daily basis.

The online system aims to curb cases of bribery and malpractice

According to recent estimates, some 2200 traffic wardens are working day and night to curb traffic violations and maintain smooth traffic on the road. These personnel have been facing punishments relating to the use (and misuse) of the fine books. Some unscrupulous elements go as far as to tamper with the physical records.

Civilians are also inconvenienced at the existing state of affairs. There are times when they return empty handed from traffic sectors, since the police does not give them their confiscated documents on one pretext or another. Even top authorities won’t be able to tamper with the records, which would ease people’s concerns about the system being susceptible to a VIP’s ‘nudge’.

Even VIPs won’t be able to tamper with the records, which would ease people’s concerns about the system being biased

The electronic issuance of fines will ensure that wardens are vigilant and efficient. It can solve all the issues faced by motorists and law-enforcers. The hope is that this digital tamper-proof system of issuing fines will foster in a culture of law-enforcement. People won’t feel that the system is flawed and this can inspire confidence between the police and the citizens.

This system can also ensure that officers on the road do their duty right as everything is electronically logged and filed away. The system will give evaluations based on key performance indicators. The system will possess GPS features, helping track locations on the roads.

In the first phase of this project, about 20 Android smartphones as well as 20 small printing devices will be provided to the CTP by Punjab Information Technology Board. Chief Traffic Officer Sohail Chaudhry confirmed the figures and added that the system will help in detecting loopholes in traffic policing in a month.

The system will provide wardens with efficient categorization options such as:

All this data can then be printed out with the challaan via the small printing devices on site.

For motorists, the biggest benefit that this system offers is that they will be able to pay the fine on the spot. No longer will they have to dash to the nearest branch of National Bank and wait in lines in order to pay the fine.

It will be the officer’s responsibility to deposit the fine tickets and the amount in their respective sectors. Since the system uses a centralized database system, the officer can’t pocket the challaan as a bribe.

So what do you think folks? Will this system improve the mentality of law enforcers and drivers on the road? Will it inspire confidence in the rule of law on part of errant motorists and sleazy wardens? Share your thoughts below.