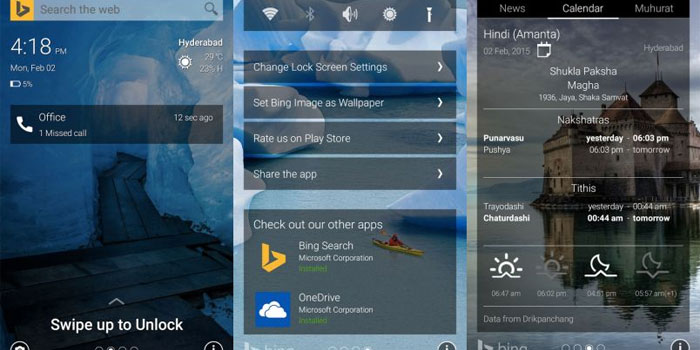 While Google may not be so keen on developing its services for Windows Phone, it seems that opposite is the case for Redmond.

The latest cross-platform offering from Microsoft is an exclusive Android lock screen app called Picturesque. The name comes from the fact that it updates Bing’s photo of the day automatically on your mobile.

The app actually is the second lock screen Microsoft has made for Android; the first was the Next Lock Screen which wasn’t exactly popular either.

Other than the photo of the day, the lock screen also offers the Bing browser which you can use to search the web if you’re one of the few people not fond of Google’s service. The app also brings news stories, which can be read without unlocking the phone.

If you don’t happen to like the photo on display, you can change for any of the one from the last seven days. There are also a few features which are region locked and won’t be available elsewhere.

Lastly, there are a few rudimentary controls such as Wi-Fi, Bluetooth, volume and brightness, as well as weather updates. You will be missing out on music controls, however.

The Picturesque app is Microsoft’s latest effort for Android. Whether it will be successful is yet to be seen but it sure looks remarkably better than a lot of other lock screens out there. We are not sure about Bing, though.