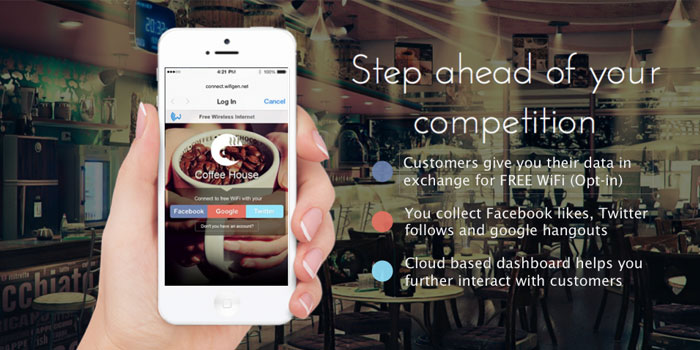 Pakistan-based startups are making waves across the tech industry in the United States. With the help of their innovative ideas, many of them have successfully managed to raise millions of dollars in startup capital in Silicon Valley, boosting Pakistan’s image as an emerging tech hub.

One such startup, Wifigen, has announced that a Silicon Valley-based investor has granted it an undisclosed sum of funds at a valuation of $1 million. The investor, John Russell Patrick, is the former vice president of IBM and an early investor in the mobile app-based transportation company, Uber.

WiFigen allows businesses to gain authentic Facebook page likes, check-ins, as well as Twitter followers for providing free Wi-Fi to customers. The startup company aims to build a unique association between the customer and the business. In this effort, it wishes to remove all intermediaries and establish a one-on-one interaction between the two.

As per the Wifigen experience, customers voluntarily provide their data to businesses in return for free Wi-Fi. When you visit a café or restaurant, you’re automatically offered internet via Wifigen’s software, which is integrated into a Wi-Fi access point present at the public place. From there, you’re taken to a branded page of that particular restaurant and given the choice to connect through Facebook, Twitter or via email.

The information gathered through your social media data is then transferred into a “Cloud Band Account”, through which the restaurant management can extract your consumer history and build your consumer profile. A collection of such consumer profiles can then be used for further analytics that can aid in tailoring the business according to consumer preferences.

Where did the team originate from?

Wifigen was one of the teams selected in the fifth cycle of the Lahore-based Plan9 Launch pad series last year. From there, it was incubated under Plan9’s ecosystem, allowing the team to bring their ideas to fruition. Eventually, the company managed to acquire its first contract in New Zealand.

After successfully going operational with its service in New Zealand, Wifigen now plans on expanding to its neighboring country, Australia. The company does eventually plan on utilizing its newfound financing to enter the Pakistani market, where they have yet to establish a public presence. Global expansion is also planned in the long run.