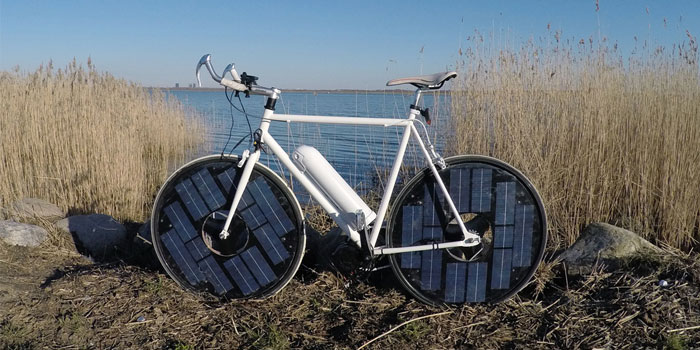 Since the inception of solar panels, scientists have been coming up with innovative ways to use the eco-friendly solar energy to power various electronic devices. The transportation industry is one key area that has the potential to benefit from the advances in solar technology. Enter the Solarbike, a solar powered electric bicycle that make it easier and convenient for cyclists to climb uphill without the need to sweat it out and struggle with pedaling.

While inventors have previously created battery powered electric bikes with superior capabilities compared to manually powered bicycles, they’re ultimately not quite as practical for longer routes. Not to mention, such bikes have looked rather poor in terms of design.

In comparison, the Solarbike features a sleek looking Scandinavian design, with a thermos shaped battery attached to its frame. More importantly, it offers a free and sustainable source of power to the electric bike through its on-wheel solar cells, which deliver clean energy directly to its battery.

As long as the bicycle is under the sun, the solar cells continue to charge its battery, regardless of whether it is stationary or moving. When it is in motion, the battery kicks out a steady electric current that provides energy to its motor. As the motor is powered, it rotates the tire and makes the bike go along without any help from your pedaling. This, in turn, makes it far less exhausting for you to travel up steep hills.

The motor’s speed can be adjusted from the standard 25km/hour to 50km/hour, which is its maximum limit. The battery’s capacity is enough to last you a 70km long journey. According to its makers, the solar cells are highly efficient and ‘shadow optimized’.

Even in its early stage of development, the Solarbike has garnered plenty of attention, even managing to land a nomination at the INDEX: Design to improve life Awards. It is currently unknown when the bike will get a commercial launch and what price it will retail for.