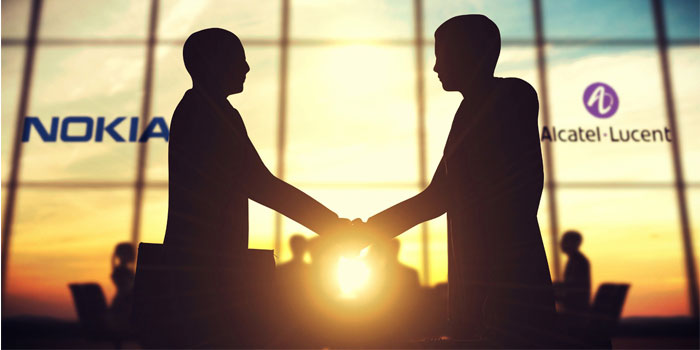 Two telecommunications giants are in the news with a deal that has the potential to make Nokia as the largest communications hardware provider on the planet. Nokia recently acquired Alcatel lucent for an estimated sum of $16.6 billion. Fresh off selling its mobile hardware division to Microsoft, this deal represents Nokia’s aspirations to dethrone Ericcson as the market leader in networking equipment globally.

The deal is expected to be closed in the first half of next year 2016 between Nokia and Alcatel-Lucent. The acquisition will see the company rechristened under the Nokia brand name, and the R&D labs under it being referred by the Alcatel-Lucent’s Bell Labs moniker.

The deal is touted as a way to uniquely position Nokia as a prime vendor for all sorts of interconnected devices. Internet of Things, for instance, is a high-growth area for Nokia and this deal will make it a primer driver for the next wave of technological change. With over 40,000 professionals working in R&D, with € 4.7 billion budget, the Nokia-Alcatel-Lucent combination will be able to usher in next-generation technologies such as 5G, cloud computing, IP and software-defined networking. They can also make their way into sensors and imaging equipment.

Additionally, Nokia has announced plans to sell its Here mapping business. This development comes right after the Nokia-Alcatel merger. According to their PR, this moment seems right to reevaluate Here’s future valuation. Reports indicate that Uber and a raft of German auto makers are interested in acquiring the mapping capabilities offered by Here.

Nokia has also announced that it’s selling its Here mapping business, a rival to Google Maps

This development is bound to be noticed by other industry stalwarts as Nokia works its way up again from the 90s heydays, a period fondly remembered as Nokia’s decade in making communication accessible for all. Market leader Ericsson will be looking at this most recent development closely.

Will Nokia finally bounce back from its lackluster smartphone production years? Only time will tell. But there’s no doubt that it is laying the foundation for future years and aspires to become a big player once again.