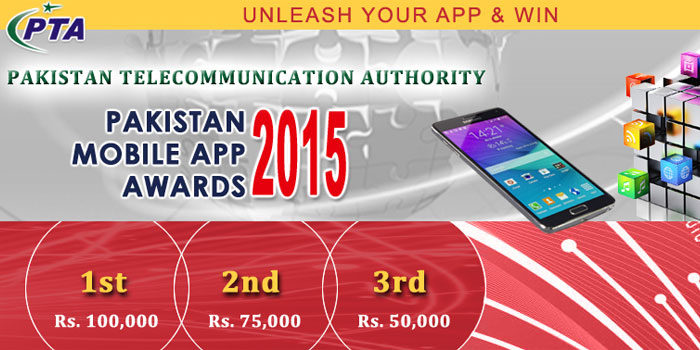 Federal Minister of State for IT and Telecom Ms. Anusha Rahman Khan presented awards to the winners of the competition during a ceremony held at local hotel Islamabad today. Chairman PTA, Dr. Syed Ismail Shah, Member (Finance) PTA, Mr. Tariq Sultan and Member (Compliance & Enforcement) Mr. Abdul Samad were also present on the occasion. The event was attended by the Representatives from the government, telecom industry, academia, media and parents of the awardees.

The awards were given in two categories. In Students’ category,

During the ceremony PTA also appreciated the efforts of two talented Pakistani individuals Mr. Iram Tariq Bhatti and Mr. Shahryar Khan for their achievements at the international level and awards were given to them to recognize the achievements.

PTA has taken this initiative proactively which should be appreciated and followed by the whole telecom industry especially by the operators to take maximum advantage from the innovative development work of these young innovators.

While appreciating the winners of the competition, she assured of the effective utilization of these applications by the related organization. She said that:

This initiative would go a long way in developing a strong relationship between the academia, industry and the relevant government organizations and would turn out to be exemplary for the rest of the sectors of our economy.

We are working for the development of telecom sector on priority basis. The revenue of telecom sector will reach Rs. 800 billion in next 5 years, whereas till year 2020 this revenue is expected to reach 4 billion dollars. Government of Pakistan is also establishing tele centres in different areas of the country specially in rural areas. This year 2015 is also declared the year of IT. We are starting 09 IT projects of 20 Billion in Khayber Pakhtoonkha and Balochistan.

We at PTA believe in harmonized efforts for the uplift of ICT Industry of Pakistan as we look forward to carrying out significant projects in partnership with the operators and solution providers in the future as well. The Pakistan Mobile App Awards is to bridge the gap between industry, academia and the regulator.

It may be highlighted that, total 100 applications were received which were later on scrutinized and evaluated by a committee of IT and Software experts through a transparent procedure of marking. All submissions to the competition were subject to pre-defined criteria including uniqueness, value to public, functionalities, sustainability and quality of the mobile application under agriculture, entertainment, kids, security, community and business categories.

With over 100 entries received, Pakistan Mobile App Awards competition proven to be well acknowledged, reflecting a lively evolution of innovation in Pakistan duly supported after introduction of 3G / 4G services in the country.