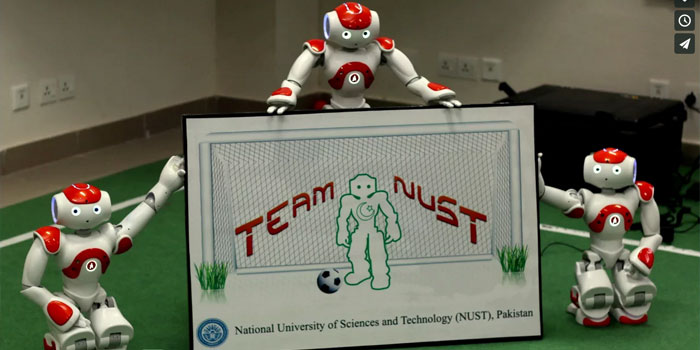 A team of students from NUST have qualified for the RoboCup 2015 with their artificially intelligent robots. This is the first time a South-Asian team has qualified for the tournament. The team will compete in the Standard Platform League in Hefei, China in July.

Team-NUST will play against 29 of the world’s best robot team in the tournament.

RoboCup 2015 (short for Robot Soccer World Cup) is an annual international robotics tournament. To be more specific it is a soccer World Cup of robots (if the name didn’t give it up). The tournament was proposed in 1995 and started in 1997. The tournament is aimed to promote AI research and robotics advancements while adding a fun part to it.

The tournament has five competition domains, leagues and sub-leagues. The leagues are RoboCup Soccer, RoboCup Rescue, [email protected], [email protected] and RoboCup Junior. The Standard platform league emphasizes the software side of the robots rather than the mechanical expertise. In this league, all teams will have the same robots but the competition will rely on software optimizations and intelligence of the robots.

Last year, RoboCup was held in Brazil immediately after the FIFA World Cup ended. The tournament management wishes to build a robot team that can beat the human World Cup winners by 2050 but that dream still has a long way to go before it can be fulfilled.

Universities have to prove their robots’ capabilities in Artificial Intelligence in order to qualify for the tournament. Team-NUST is a 8 member research group from the NUST-SMME RISE Research Center.

The members of the team are listed below:

The Pakistan football team does not seem to have much hope for qualifying to the FIFA World Cup any time soon but we can make do with Pakistan’s robot football team in the meantime. The tournament will be held from 17th July to 23rd July 2015. We wish our team the best of luck in this competition.