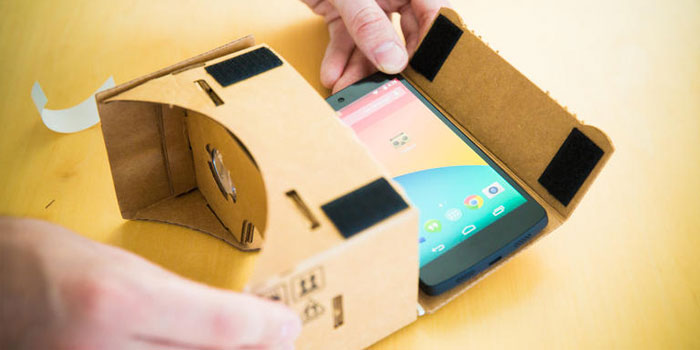 Virtual Reality is an exciting development but it seems to be an expensive one. Whether it’s the Oculus Rift or any other pair of VR goggles, we can’t really see prices being in the reach of most consumers here in Pakistan. That is why cardboard VR headsets, which provide a great way to experience VR, are a welcome development.

Originally kickstarted by Google Cardboard, these VR headsets are a low cost way to encourage development and interest in VR. You simply download the schematics (link at the end) and build it yourself or you can buy a pre-made one for cheap. It’s one of these ready-to-go headsets that we’ll be reviewing today.

Sold by an online store called Bytes.pk, I got a chance to try out the Bytes VR Core 5.7 model and used it with an Sony Xperia Z3. There are four models and the differences between them are shown in the tablet below. 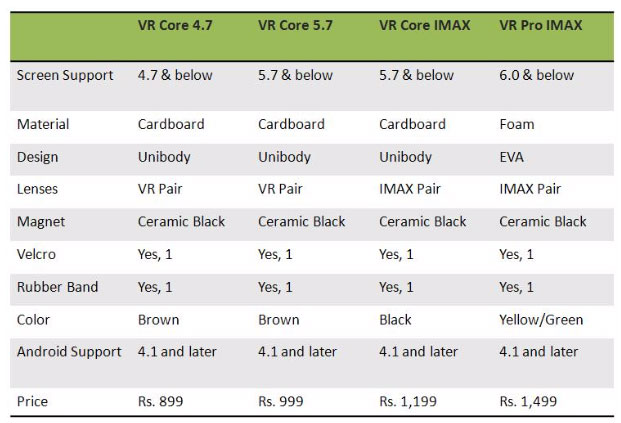 The base design of these headsets was decided and finalized in one of Google’s 20 percent projects – a sideline policy that allows Google employees to work on whatever they want alongside their normal day to day work. This one concept simply blew up and spurred a lot of development.

For our VR headset, assembly is pretty easy. It took me ten minutes to get it ready. The main elements are the two professional lenses attached in the pack, which allow 3D immersion. There is also a magnet switch to allow the control of the Google cardboard app.

The cardboard is designed in such a way that it employs the natural bisecting vision (line of sight) of our eyes and creates a cinematic virtual reality environment, Seeing inside of it with a smartphone allows for real-time cinema-like visualization.

The Google cardboard app can be downloaded from Play Store for free. This independent application also allows us to download more VR specific applications. Once our phone is fit into the VR headset box, the only control outside is the magnet switch which uses our smartphone’s magnetometer (built into every phone as a compass).

The enjoyment involves starting any VR capable app with the phone inside the cardboard and tilting our head left, right, up and down – so the scenery also moves accordingly. So moving my head towards the left direction will move the scenery on its right (as if I were tilting my head in real). The same movements apply to the virtual emphasis that the headset provides to us.

I started off my experience with an app named ‘An Unseen Sky VR’. It starts in a forest area with birds chirping and a natural scene set around us. The sound is really soothing and touchy. Moving our head actually allows us to see everything in the forest. As the scene moves forward, we enter a cave with a wolf and go past through it into a raining garden where the journey actually ends. It was a good experience as a starter.

Then there is the ‘VR Cinema app’ which runs any video file into split screen 3D mode just like we see in a cinema. Plus this one also has the ability to use our phone camera as the real view-finder! So we need to turn the camera on and we can actually see through the camera while walking forward or back. I bumped into my room’s walls once because of trying this, so precaution is recommended!

Then there was this ‘Insidious 3 VR app’ which takes us into a 3D room with a lady telling us not to be afraid. And while she talks, the door bangs, the windows break, the table rumbles… and at that moment I stopped the app because I was seriously frightened! The came in the Roller Coaster VR snapped below:

The best one which made me practically jump up on my feet was the Crazy Swing VR. It is a joyride in between a city with tall buildings. Once we tilt our head towards the right, the ride starts up, and no words can describe how many times I felt like it was really happening to me!

For the price, this really is amazing technology. Entertainment is the main aim of the VR game and my experience was very positive. New applications are being developed for Google Virtual Reality headsets by major developers so the platform won’t become stagnant anytime soon.

Adding in a pair of headphones increases the already awesome feeling but that needs a custom hole you’ll have to make yourself. I had to put in two pieces of white tape on the front area because it was soaking moisture every time I used it (credit goes to the summer season) – this is the downside of reasonable yet cheaper materials being used!

If you are fascinated by technology or are even remotely interested in virtual reality, a low cost cardboard headset is a worthwhile investment. You could buy one off of the internet or just follow the instructions and print out the schematics from Google’s own website.