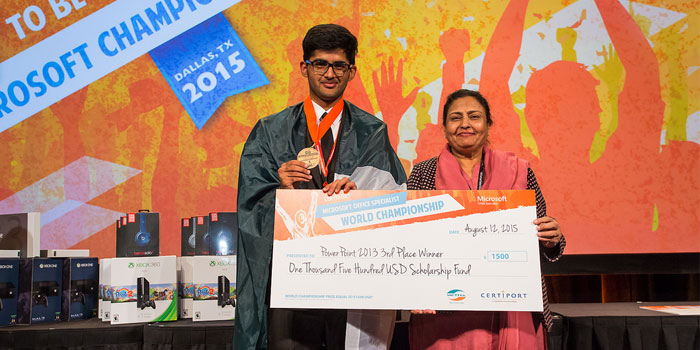 Waqas Ali, a Pakistani student hailing from the Ghotki district and a student of Mirpur Mathelo FCC Government Grammar School, competed and won a bronze medal for PowerPoint 2013 at the Microsoft Office Specialist World Championship 2015 (MOSCW).

The event was held between 9 to 12th August in Dallas, Texas. The event attracted 600,000 participants who were well versed in Office and other Microsoft products. After the initial qualification rounds, the winners were asked to come to Dallas for the final round. Sadly, Waqas Ali was the only Pakistani participant and he even made the journey on his own expense. It was the 14th edition of the MOSCW. The final round of the championship saw 145 students from 47 different countries.

I am feeling so many things right now, but most of all, I am proud that I have won. This was the first time for Pakistan, I was the only one, and I’ve won it. In fact, no, this is not my win. This is the win of my family, TEC Education Foundation, my friends, for all their support during this competition.

First position was scored by a Thai citizen while the silver medal was scored by a US Citizen. In total, there were 145 students who participated in the Office 2010/2013 category each belonging to one the 127 participant countries.

These winners are part of an elite group that know how to use Microsoft PowerPoint efficiently and to its full potential. We are proud to support this competition as a vehicle to promote what the world needs most young people who possess in demand workforce skills.

General Manager of Learning Experience at Microsoft, Alison Cunard, was also present at the event. He said:

More than 1.2 billion people use Office worldwide, and these students have taken the time to set themselves apart as the best of the best”

Next year’s MOSCW will be held in Orlando, Florida. It is great to see Pakistani talent emerging on top in competitions ranging from gaming, to sports and other categories. Waqas Ali made a point that there is talent hidden across Pakistan but our government and other institutions fail to promote them or even help them get noticed around the world.