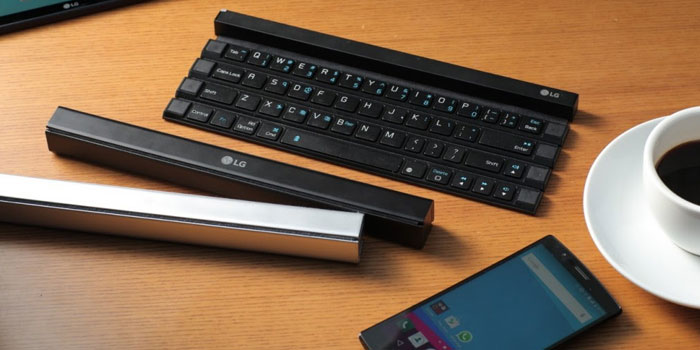 No matter how good your virtual keyboards become, there will always be a crowd which will prefer touchable, physical keys to them. LG knows such a market exists and has announced a product just for them.

The new “Rolly” is a Bluetooth Keyboard, which packs a unique trick up its sleeve: foldable design. So when you’re not using it, it can simply be folded into a stick for better portability. It gets its power from a single AAA battery, which provides three months of usability.

The keyboard offers a 17mm key pitch, which is almost similar to the 18mm pitch found on most desktop keyboards and provides a tactile feedback to make it more comfortable for longer periods. The polycarbonate plastic design also features two sturdy arms to hold your tablet or phablet. To be honest, that is the market which this keyboard really caters to.

The Rolly keyboard can connect to two devices at once via Bluetooth 3.0, and features a key to toggle between the two. The keyboard will be available in markets starting from next month. Pricing details are yet to be announced. More details should be out at the IFA event in early September.

With the correct pricing, LG might have a winner in its hands. Thanks to a impact-resistant, foldable design which makes it easier to stuff in a bag, the keyboard has the potential to get popular among diverse market segments quickly.