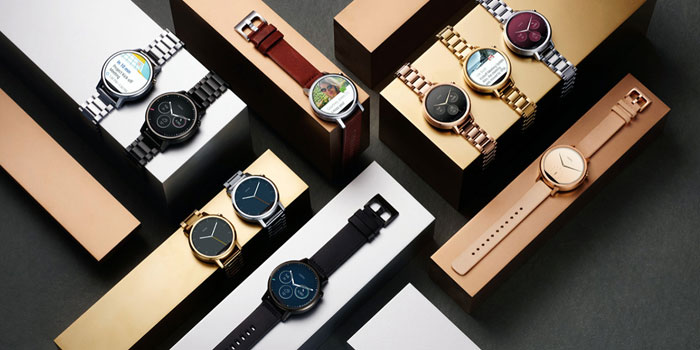 After a plethora of leaks surrounding Motorola’s next smartwatch, Motorola has finally revealed the second generation Moto 360. This time, the smartwatch comes in separate models for men and women, alongside a sport version that will be available a little later.

The new Moto 360 comes with improved battery life and better design albeit a flat tire display. Motorola explains the decision to go with a similar display by saying that it was necessary to keep the bezels slim and a 71.7% screen-to-body ratio. The regular Moto 360 will come in 46mm and 42mm options for men, while the version for women comes with just the 42mm band.

Both 42mm versions come with a 1.37-inch display and a 360×325 resolution. All versions are covered in Gorilla Glass 3. It runs on the latest Android Wear, enhanced with Motorola’s custom watch faces and Live Dials. The heart-rate sensor, Bluetooth, Wifi, Wireless charging and IP67 waterproofing are carried over from the last gen Moto 360 as well.

Motorola has introduced the traditional lugs this time around so changing wrist bands should be a breeze. The power button of the second gen watch has moved from the 3 O’ clock position to a 2 O’ clock position.

Moto 360 will be extremely customisable and buyers will be able to choose from a variety of materials. Bezel designs, basic colours, wrist band colors and its choice of materials. The price for the new Moto 360 will start from $299 and go up to $429 depending on the materials of choice.

Moto 360 is built with active users in mind and comes with everything the Moto 360 has plus a few little extras. It offers the same 1.2GHz processor, 512MB RAM, 4GB storage and a display with similar resolution. The display size dimensions have not been detailed so far but its stated that it will arrive in only one size.

What’ changed is that it has integrated GPS and comes with a better AnyLight Hybrid display that has better sunlight legibility and can work without the phone. It can also store music for offline streaming. The waterproofing is enhanced by using stronger silicon bands which have been UV coated and can handle moisture much better.

The pricing and availability is yet to be detailed by Motorola but its expected to release before the end of the year.