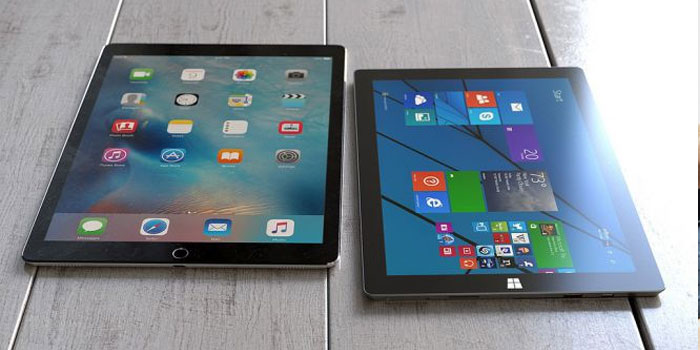 Apple is famous for its sleek luxury devices and is no doubt an acknowledged leader in the tablet category. However, it seems like the novelty is wearing off.

Apple’s new iPad Pro is the talk of the town. The dominant opinion is that in trying to gain the favor of business category, Apple inadvertently acknowledged the success of Microsoft’s way of thinking instead of doing an innovative rebooting of the iPad lineup.

Is this true? We think so.

We also think that there was nothing inadvertent about it. Apple shamelessly took direct inspiration from Microsoft’s Surface Pro line and therefore openly admitted that Microsoft is where the future of the tablets actually lies.

Let’s back this statement with some facts. Here is a comparison of Apple iPad Pro (2015) and Microsoft Surface Pro 3 (2014). By the way, did anyone notice the similarity in the names? We sure did. Now there’s a lack of creativity speaking for itself…

Anyway, coming to the specs of both the devices, there is no denying that both are slick, slim and light devices aimed at the professional market. However, the positives of the iPad Pro don’t quite manage to rival the Surface Pro line though Apple tried very, very, very hard.

Apple used its own premium design recipe for the iPad Pro: metal body, thin, encased in high grade aluminum. It weighs around 700 grams (heavier than the original iPad) and still it manages to be 11% lighter and quite thinner than the Surface Pro 3. However, it is also 5% longer and 10% wider than Microsoft’s manageable size encased in magnesium which is 11.5 x 7.9 inches compared to the 12 x 8.7 inches for the iPad Pro which is ultimately too big for a tablet. Not to forget, Surface Pro also contains a built-in kickstand lacking in the iPad.

IPad offers a 2732 x 2048 retina display on a 12.9 inch screen while Surface Pro has a smaller 12 inch panel with a resolution of 2160 x 1440. That’s right; Apple added 20% more to the already enormous screen of the Surface Pro. You might enjoy the sharper pixel density but the screen size makes the device overkill for regular use.

You get an 8 mega-pixel camera on the back of iPad Pro, while Surface Pro has a 5 mega pixel camera at the back but iPad’s front facing camera is only 1.2 mega-pixels as compared to 3.5 mega-pixels gracing the front of Surface Pro. Guess which one is a better option for professional video chats?

IPad Pro is powered by Apple’s new third generation 64-bit A9X chip while the Surface Pro 3 uses a real laptop chip; Intel Core i3 upgradable to i5 and i7 which gives it the power to provide the full Windows experience, perfect for enterprise tasks.

As for the software, iPad Pro runs on iOS 9 which lets users multitask by running two apps simultaneously. Let’s take a moment here to acknowledge that this feature is an exact replica of a feature included in the Windows 10 operating system packed into Surface Pro 3 by Microsoft. Let’s also top that with the fact that Windows is a desktop OS capable of running full desktop apps like Photoshop and AutoCAD while iOS is a mobile OS limited to mobile apps. This alone is a deal breaker for the businesses Apple made the Pro for.

Microsoft provides much more to work with in terms of storage. While iPad Pro offers 32 GB and 128 GB models, Surface Pro comes in various different configurations, from 64 to 128 to 256 to 512 GB! A little variety in storage capacity never harmed anyone, if you ask us. Couple this with a micro SD card slot that Apple always has had an allergy to, and Microsoft comes on top without even trying.

Not that any conclusions can be drawn about the battery life from mere words and estimates, but Apple does claim that the iPad Pro has a 10 hour battery life compared to the 9 hour battery life offered by the Surface Pro. Okay Apple. We give you this one. One hour advantage. Bravo!

Windows 10 has traditional universal desktop apps which are suitable for companies that develop their own applications with decreased cost and time required to maintain them. While Apple still doesn’t allow you direct access to its file system and all of its software comes from the App Store. (Do you really want to put your trust in a device that doesn’t trust you?)

Then there are the ports. Surface Pro contains USB 3.0 port, a microSD slot, and a Mini Display port for use with external displays. Needless to say, iPad lacks all these ports and supports only a lightning connector port. So a company that uses a variety of devices for storage and connectivity won’t be able to charge the device while it’s connected to another accessory. Call us crazy but we think businesses really don’t have time for that.

iPad Pro has a ‘Pencil’ and Surface Pro has a ‘Pen.’ Don’t be tricked by the names of the styluses. We’ll tell you what really counts. Microsoft includes the Surface Pen with the Pro 3 while the Apple pencil is a separate 10k purchase. If you are rolling in money, you can also purchase the Surface’s Type Cover and iPad’s Smart Keyboard separately.

If you are one of those consumers who are locked into Apple’s ecosystem and begin to salivate every time Apple launches a new product (with others’ ideas crafted and repackaged expertly as its own) you might think the iPad Pro is worship-able. But those who are sensible consumers can clearly see that Surface Pro is the superior product in this matchup.

Both devices are quite expensive, but the difference is in the value offered. Compared to what Microsoft is offering, it doesn’t make sense for a usual customer to drop 80k+ (excluding stylus price) on iPad Pro. Surface Pro appeals to its customers because it offers a better functionality than its Apple alternative. This makes it a better priced device which is available for anyone who wants one while iPad Pro isn’t even in the market yet.

Also keep in mind that this comparison was done with a Surface Pro device that came out last year. Apple has no idea what Microsoft has up its sleeves with the Surface Pro 4 but whatever it is, it will definitely top what Apple will offer. After all, you cannot replicate an idea before its formed, can you? Apple waved the white flag by handing the crown to Microsoft. Needless to say, it’s fighting a losing battle.