Mobile phone companies operating in Pakistan are planning to boycott upcoming 3G / 4G auction after broken promises from Punjab Government for removal of internet taxes, increased taxes on telecom services and equipment, inept policies and government’s non-serious and stubborn behavior towards telecom sector, we have learned from senior management of telecom companies.

“One should not consider our absence in upcoming 3G / 4G auction as a protest, but rather a rational business decision based on investments we have made so far and the returns that we are getting after recent internet taxes”, said a C-Level executive of a mobile phone company who wanted to remain unnamed.

Telecom companies invested over $2 billion dollars during last one and half year for the the 3G / 4G spectrum and next-gen network roll-outs. As a result, 3G uptake during 2014 remained tremendous, however, later on in 2015 things went shady and results remained below expectations mainly due to SIM re-verification exercise from February 2015 to May 2015.

Then during late May 2015 Punjab Government imposed 19.5% taxes on internet usage for mobile users in Punjab, a province that holds 60% of mobile phone users and where mobile phone companies were most aggressive in terms of 3G roll-outs.

Negative impact on 3G growth rate is evident from below graphic: 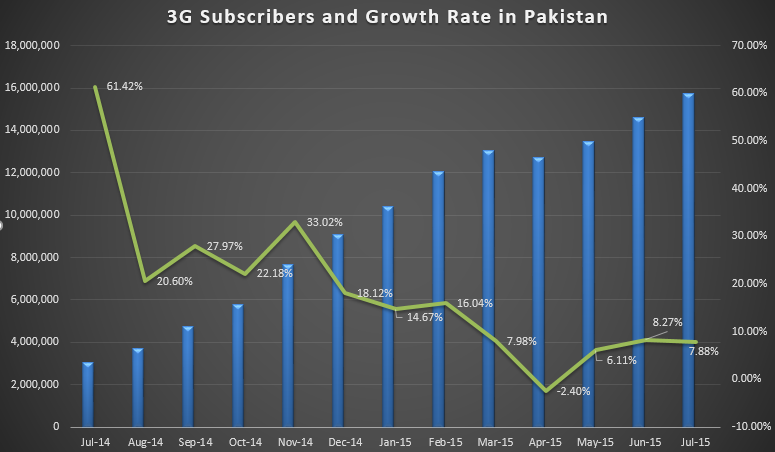 Operators say that as a result of prevailing business conditions, their overall revenues have dropped significantly due to deduction of heavy taxes constituting half of their earnings (50 percent) at present which are unbearable for them in long-term, hence their investment to expand 3G/4G technologies network is inevitably affected.

Majority of telecom operators have halted or at least slowed down their network expansion plans that has limited 3G outreach in new areas, especially for rural population who don’t have any other means of internet.

“We had invested several million dollars in Pakistan based on the promises and commitment from the government, that had then agreed to facilitate cellular phone sector through incentives but it took u-turn by introducing new taxes on data services and mobile internet, which is rarest in the world. We don’t have a choice but to re-route our investments to other growth markets with higher ROI”, said a senior official of a telecom company that has presence in multiple markets including Pakistan.

Government is likely to generate Rs. 5-6 billion through internet taxes, however, the expected loss in economy as a result may amount to several hundred billion rupees

Telecom companies say that they invested billions of rupees and lost multiple folds more by seizing their business activities for over four months to complete Biometric Reverification of SIMs by letter and spirit, however, their efforts and endeavors were not recognized in turn of tax relieves.

Also Read: Internet Taxes by Punjab can Cause National Economy Up to Rs. 200 Billion in Losses

“After recent internet taxation regime from current government, one shouldn’t be surprised if FDI in telecom sector goes down. They should also not worry about multiple fold negative impact on overall economy due to decreased FDI coming into the country and lower internet penetration”, said a telecom expert.

The unfavorable business environment of telecom sector and stubborn attitude of federal and provincial government (mainly Punjab Govt) is leading to the failure of next spectrum auction which is expected to generate $500 million next year.