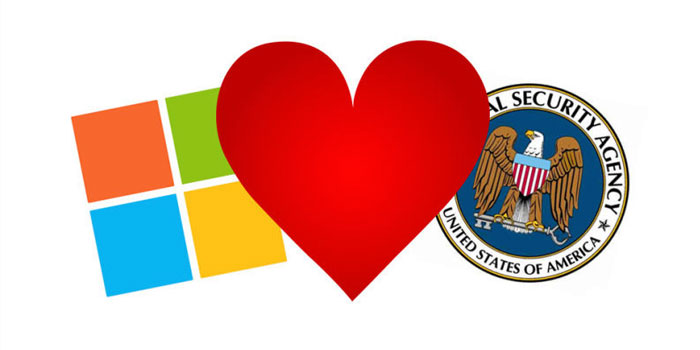 Edward Snowden has revealed that Microsoft and NSA have been working together in order for the latter to keep track of user’s communications. Even though these communication channels were encrypted, most likely the only way that the United States government and National Security Agency would have bypassed the security was if Microsoft worked alongside them.

The encryption was meant to protect but leaked internal memos suggest that the NSA had access and abused the privacy of millions. The platforms where Microsoft helped the federal government to decrypt the messages are:

Now here is where things get really interesting; among the several discoveries made, one of the most horrifying ones was the fact that Microsoft aided the NSA in decrypting chat messages sent over the Outlook.com portal before the service was even made available to the public. The source has stated the following concerning the revelation:

The files show that the NSA became concerned about the interception of encrypted chats on Microsoft’s Outlook.com portal from the moment the company began testing the service in July last year. Within five months, Microsoft and the FBI had come up with a solution that allowed the NSA to circumvent encryption on Outlook.com chats.

Furthermore, if you thought Outlook.com was the only service where data was being checked thoroughly, then Skype and SkyDrive (now known as OneDrive) also worked with intelligence agencies in order to let administrators of the PRISM data collect information of all messages and files that were being passed through these applications.

Additionally, Microsoft also said in a statement that there was not a concrete rule preventing it from giving out information to concerned authorities:

When we upgrade or update products we aren’t absolved from the need to comply with existing or future lawful demands. Only in response to government demands do we ever comply with orders for requests about specific accounts or identifiers.

While there was always a fraction of a doubt that tech giants would safeguard the data being passed through their services, it looks like the latest leak has finally confirmed the lengths that security agencies will go through to tap into the private lives of users who send messages and files through major services.

We aren’t saying the likes of Microsoft shouldn’t comply with local law enforcement but maybe they should try growing a backbone and take a stand like Apple instead of making excuses after they’ve been found out.