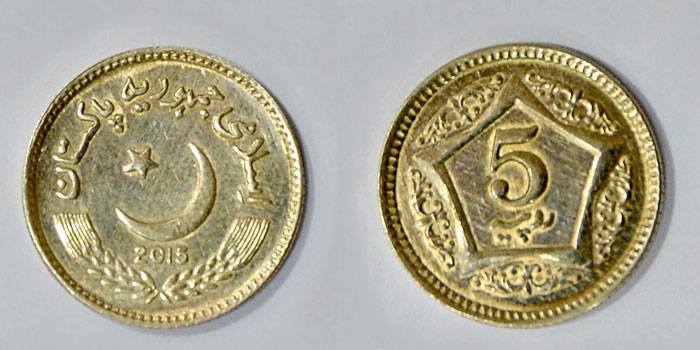 The State Bank of Pakistan will issue Rs. 5 coin of new size and changed metal composition. These coins will be issued through the exchange counters of all the field offices of SBP Banking Services Corporation from 15th October 2015.

The obverse side of the coin is depicted with the waxing crescent moon and a five pointed star facing north-west in rising position is in the center on the obverse face of the coin. Alongwith periphery on the top of the crescent star is inscribed in wording “ISLAMI JAMHORIA PAKISTAN” اسلامی جمہوریہ پاکستان in Urdu script and below the crescent and at the top of two springs of wheat with arms curved upward, there is the year of issuance. A circle of small beads is all along the edge of coin

Further, it may be noted that the existing Rs.5/- coin will also be in circulation along with new coin.