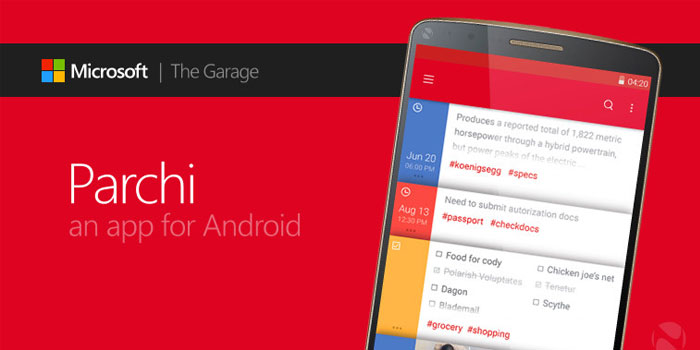 Microsoft’s Garage has made a habit of releasing nifty apps for the Android platform. Send was released a few weeks ago and there have been rumors of Dialer app in the works. The latest app from the Garage is Parchi, a simple and light note taking app. The name of the app pretty much details what it’s meant to do.

Parchi does mean small notes and that’s what the app does. The app has a very clean material design and is very simple with focus on the basic task; i.e. taking notes. Notes in the app are small and short.

Microsoft has applied a unique method to organising the notes. Of course, there are the common methods like setting reminders, changing colors and setting some notes as favorites. What’s unique is the new method of setting tags to find notes easily. And tags are pretty easy to set and only require hashtags. Examples could be like #groceries, #idea, #cricket and infinite number of other similar tags. 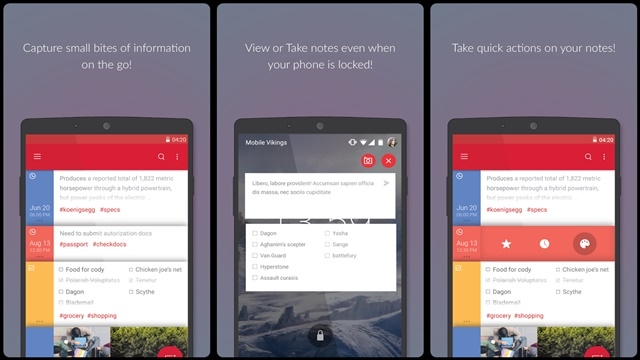 Another unique feature is that the app allows users to take notes straight from the lock screen. It doesn’t even require the user to open the app, and notes can be added easily on the overlay screen for note taking. The usual stuff is there too, and notes support text, pictures and lists. Note sharing and backups are pretty simple too.

One thing that will have most people confused is whether to use Microsoft’s OneNote app or this one. Both are excellent and come with great features. OneNote is more professional while Parchi makes on-the-go note taking a breeze, which might assist you is deciding which app to go for depending on your use.

The team behind the app discussed the app’s development on the Microsoft Garage site:

When building Parchi we had three main goals – the app had to be quick, it had to be super easy to use and it had to adapt to the user. And so started the 5 month journey! We’ve learnt a lot from our early users – what we got right in the first try (taking notes from a lock-screen) and what needed improvements (adding structure to the unstructured notes).

Now for the bad news, the app is only available in some markets. The app seems to have regional limitations for now. The app can be downloaded from the Play Store here. Or if the app hasn’t rolled out to yet, click here and install using the apk file provided by Android Central.