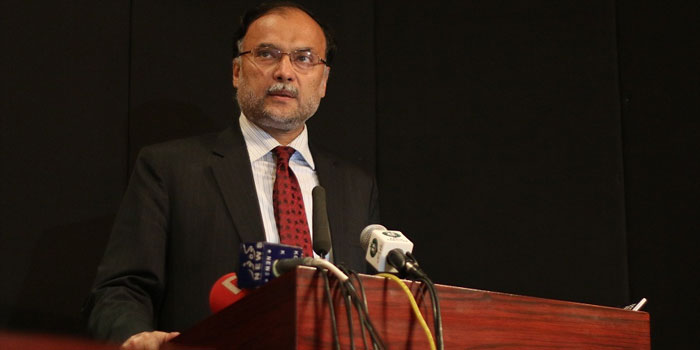 The Federal Government under Pakistan Muslim League (N) and the provincial government of Punjab are not satisfied with the telecom sector and its contribution to the national economy at large in the context of remarks made by Ahsan Iqbal, a Federal Minister.

As a chief guest at a gathering of corporate delegates and media in Karachi held on Monday, the Federal Minister of Planning, Development and Reform sarcastically remarked that ‘They should do more for philanthropy like the other industries do instead of gifting free minutes to their users.’

‘Telecom operators’ contribution towards corporate philanthropy is negligent compared to other sectors, especially the financial sector which is at the top of the list,’ the minister said while praising donations made by the corporate sector and their philanthropic endeavors.

The honorable minister may have a different personal viewpoint here. But it reflects the general attitude of the party he belongs to since on one hand the PML(N) has enhanced tax rates on services provided by mobile phone operators and on the other hand, it is giving this impression to users that the telecom sector is fleecing them.

The PML(N) government not only enhanced withholding tax rates to 14 percent from 10 percent, but it also almost doubled GST on mobile handsets in the current financial year. It also robbed the telecom sector of the Rs 70 billion that they collected as development fund of ICT infrastructure. This in addition to the other directives where the PML(N) government in Punjab introduced 19.5 percent GST on mobile internet and etc.

Is Govt Destroying the Role of Telecom Sector In the Economy?

Of course, cellular operators have made profits but the honorable federal minister, who is in-charge of the Planning Commission, should recognize the fact that telecom operators have been one of the major contributors in bringing foreign direct investment (FDI) in the country over the past 15 years.

The telecom sector is the second highest contributor of revenue to the national kitty according to data available with Federal Board of Revenue (FBR) and is annual reports.

In the event held by Pakistan Center of Philanthropy, Mr. Iqbal was critical and said telecom contributions towards donations and sustainable development initiatives were minimal at best. He was not aware of the Corporate Social Responsibility (CSR) activities carried out by these telecom operators in Pakistan, many of which were trendsetters in Pakistan and also emulated by other companies.

There are some CSR activities which attracted global attention and applause. Case in point, Ufone received a CSR Award from United Nation’s Department in 2012. Similarly, Mobilink won GSMA award in 2013 for its SMS-based Literacy Program which also awarded a grant by UNESCO.

In his speech, Ahsan Iqbal emphasized the importance of highlighting the positive image of the country by media and foreign investors although he is not aware of the fact how Pakistan’s own telecom sector revolutionized the service sector for public ease. Easypaisa is one such example which has become third largest branchless banking and winner of two GSMA awards in 2014.

Telecom operators should ponder over strategy and policy of their image building activities and ensure presence of policymakers at their events and happenings. This can help them effectively communicate their role and contribution in the economy, in sustainable development of the society where they are operating and welfare projects under CSR.

The issue of poor image-building is not limited to the case of the government only but all telecom operators who failed to communicate their importance and role to all stakeholders involved in the economy and social development.

Telecom operators should build a joint platform for redressing their mutual issues which should work continuously, and not just when a crisis situation develops.  A couple of them recently came up such as ICT Forum Pakistan and ICT3 but operators were reluctant to support them.

It’s high time the telecom sector gets its act together. It needs a spokesperson and a platform so that they can utilize the media and speak on the behalf of the sector not only to protect interests of industry but also the consumers.