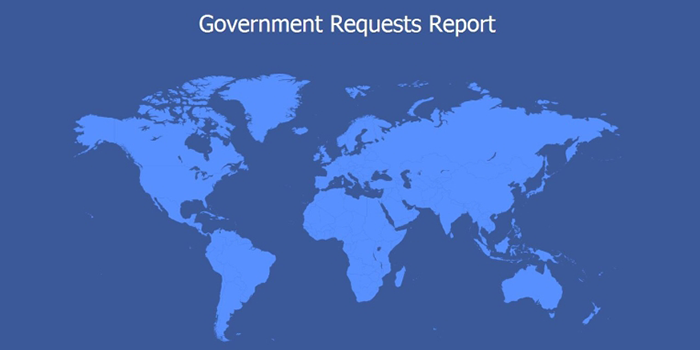 With issues of privacy now at an all-time high, it is becoming clear that the biggest intrusion might be coming from our governments themselves, rather than any other entities. According to Facebook, government requests for private accounts data increased by 18% compared to the first half of 2014. This year, goverments worldwide made 41,214 total requests.

The United States Govt. took the lion’s share with 80% of the requests, followed by India, the U.K., Italy, France and Germany.

Furthermore, the number of posts taken down due to restricted content also increased by a mammoth 12 percent compared to the first half of 2014, to around 12K posts. India and Turkey formed the bulk of these takedown requests made to the social network.

Facebook maintains that each request made is verified for “legal sufficiency”. In case that the grounds for such requests are not valid enough, the company fights back hard and can go to court:

“As we have emphasized before, Facebook does not provide any government with ‘back doors’ or direct access to people’s data. We scrutinize each request we receive for legal sufficiency, whether from an authority in the U.S., Europe or elsewhere. If a request appears to be deficient or overly broad, we push back hard and will fight in court, if necessary.” – Chris Sonderby, Facebook’s deputy general counsel

Such concerns are obviously not new now. Ever since the Edward Snowden revelations, Facebook now maintains a separate section in its website which shows the relevant data. It goes one step further to notify the user once their account is hacked to take cautionary action.

In other news, Yahoo has revealed that it has seen government data requests on its networks rise by 60 percent YoY, to 5221 total requests this time around. It disclosed content to satisfy 1568 of those requests. The ever increasing role of governments in snooping through private information represents one of the biggest issues of the 21st century.