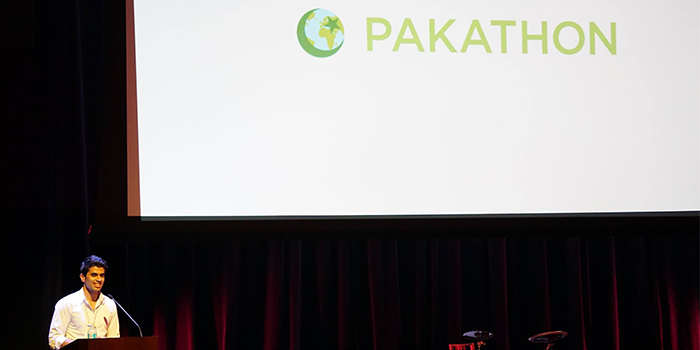 Teams from four countries presented their innovative startup ideas to a global audience of mentors, judges and interested observers at Toronto’s Aga Khan Museum, as part of Pakathon’s Global Finals on November 8.

A day of inspiration, culture and innovation, featuring actor Ali Kazmi as host, the event showcased 11 top-performing teams, all of whom were finalists in their respective home cities from October’s local hackathon events.

Two winning teams were announced–one from within Pakistan and another from among Pakathon’s global chapter cities, which include Boston, New York, Toronto, Melbourne, Washington DC and Chicago. After careful deliberation, judges selected NUST’s Green Thumbs from Islamabad as their Pakistani selection and Ammi from Toronto as Pakathon’s global winning team.

Ammi’s plan centers around providing accessible maternal health tips using mobile phones. According to team member Israa Nasir, the entire project idea was pieced together during October’s Pakathon 2015 event, and mentors were essential factors in Team Ammi’s progression. The team plans to continue working on their product until they launch, and then with support from both Pakathon and mentors, they plan on expanding their initiative on a small-scale basis. Pakathon aims to support Ammi’s services by providing essential on-the-ground connections, and by opening partnership channels with the organization’s global community of investors, mentors, and leaders.

Similarly, Green Thumbs also credited university mentors as key driving forces behind their concept. The Islamabad team plans to expand their efforts by integrating more technological aspects into their work, with the aim of magnifying their impact. According to team participant Awais Saeed, their goal over the next six months is to cover many schools in Islamabad and Rawalpindi, once the organization is more established and a financial plan is in place.

When asked why these two projects were successful, Kalsoom Lakhani, who was part of the judging panel, said:

Team Ammi made excellent progress with their business. Where others were presenting ideas, in the couple of weeks between their initial pitch and the finals Team Ammi had prepared a first version of their product and signed partnerships.

It felt like a real business. Team Green Thumbs has an ambitious goal, yet a simple and practical way to achieve it. One big question for us is if the team will stick with things, and Green Thumbs felt like they were so motivated that they would.

When asked about the day’s most memorable event, Pakathon judge and Director of The Founder Institute, Kamal Hassan said, “The musical performance was excellent. I was especially sorry that my Urdu wasn’t good enough to understand the poet. The oohs and ahhs from the audience made it seem like he was remarkable.”

Pakathon is a Boston-based nonprofit organization, with over 15 global chapters, that empowers Pakistanis around the world to become positive change-makers in their local communities, and also at the global level. Through mentorship, educational programs, funding and collaboration, Pakathon is solving the country’s problems, sector by sector.