The volume and value of branchless transactions during April-June 2015 demonstrated a sizeable increase of 37% and 43% respectively, as compared to previous quarter, said recently shared stats by State Bank of Pakistan.

This growth trend demonstrates the fact that people have started considering branchless banking as a key tool for satisfying their basic financial needs.

Trend in Number and Value of BB Transactions 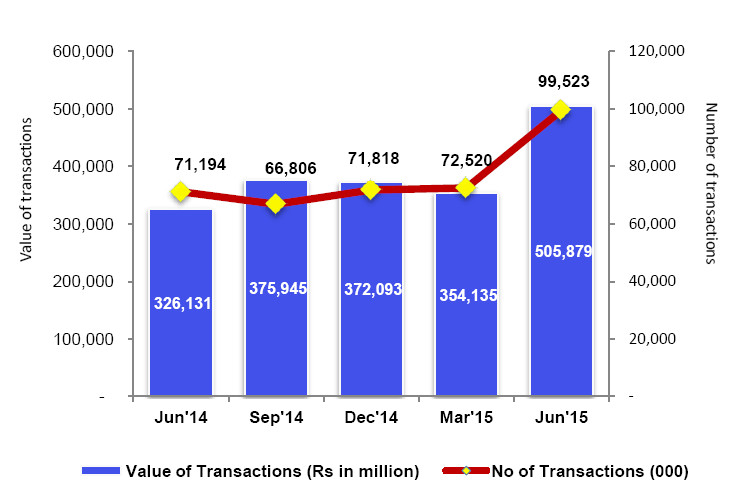 State bank said that BB players should take steps to reinvigorate the inactive agents through agent development techniques such as guidance, trainings and due facilitation.

The branchless banking accounts exhibited a sharp rise as well — thanks to biometric verification of cellular SIMS — increasing from 7.5 million accounts in the previous quarter to 10.8 million, in the quarter under review.

During the quarter mobile phone companies allowed its biometrically verified customers to open level-0 accounts through a USSD. This resulted intro massive opening of level-0 accounts which now constitute 87% of the total BB accounts.

A total of 1.3 million customer accounts during the quarter were opened. 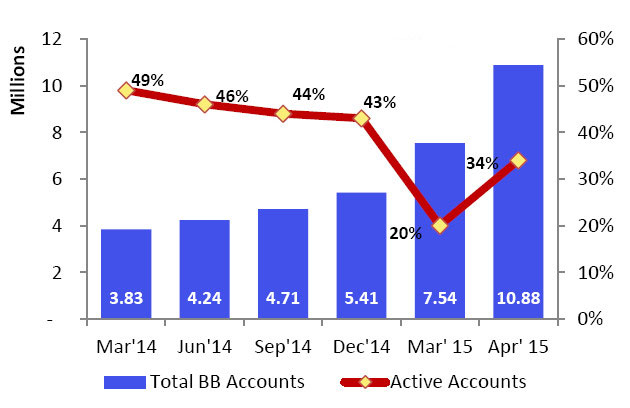 Easypaisa, Omni and Waseela have the highest number of digital account holders, with 7.6, 1.8 and 1.2 million accounts respectively. These three players contribute to 98% of the total m-wallets, whereas the other 5 players have a 2% market share.

Apr-Jun 2015 quarter reversed the declining course of activity in BB accounts after 4 continuous quarters. The active-to-total account ratio climbed to 34% from 20% in the previous quarter which may be attributed to the release of two BISP tranches, rise in fund transfers between m-wallets and mobile top-ups through m-wallets.

The value of m-wallet transactions experienced a hefty growth of 165%, climbing to Rs. 90.7 billion from previous quarter’s Rs. 34.2 billion.

The number of m-wallet transactions also increased manifolds, ending up at 28.1 million from the previous quarter’s 7.9 million.

Cash deposit & withdrawals topped the chart in number of transactions, doubling to 10 million from the previous quarter’s 5 million, followed by G2P and Funds transfers through m-wallets.

Merchant payments still remain an ignored segment with a meager contribution of 0.11%; both in numbers and value.

State Bank said that BB players need to focus on merchant payments, which can add more value in m-wallet usage.

IBFT – Interbank Fund Transfer transactions, which are fund transfers between core banking accounts and m-wallets, showed mixed performance. The number of transactions declined from 281,841 to 254,471; however a QoQ increase was observed in total transactional value from Rs. 6.8 billion to Rs. 7.5 billion.