Telenor Pakistan today announced that it posted a total revenue of Rs. 26.10 billion during Q4 2015, showing eight percent YoY growth during the reported quarter. Telenor said that strong revenues were mainly due to continued growth in financial services and higher ARPU.

The telecoms company, in the financial results published moments ago, said that its capital expenditure was prioritized towards expanding 3G network coverage and capacity. At the end of the quarter, the 3G population coverage stood at 46%.

The EBITDA margin increased by 12 percentage points including the positive effects of the abolishment of the SIM Activation tax with effect from 1 July 2015, in addition to improved revenue growth, lower energy costs from efficiency initiatives and one time effects.

The number of subscriptions increased by 1.3 million during the quarter. The subscription base was 5% lower than the same quarter last year, given the impact of the disconnection drive of unverified SIM cards during the second quarter of 2015.

Telenor said that its ARPU in local currency increased by 15%, reaching Rs. 212, up from Rs. 180 during Q4 2014. It said that the increase in ARPU is primarily due to the disconnection of unverified SIM cards in the second quarter and increased incoming international traffic.

Average traffic minutes per subscription per month (AMPU) for Telenor customers stood at 298 during the quarter, up from 258 average minutes during the same period last year. 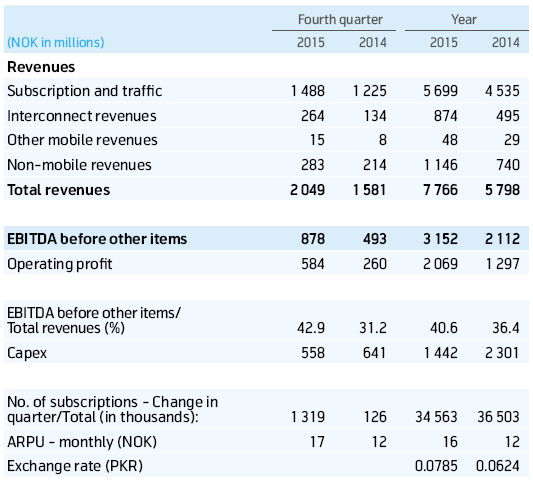