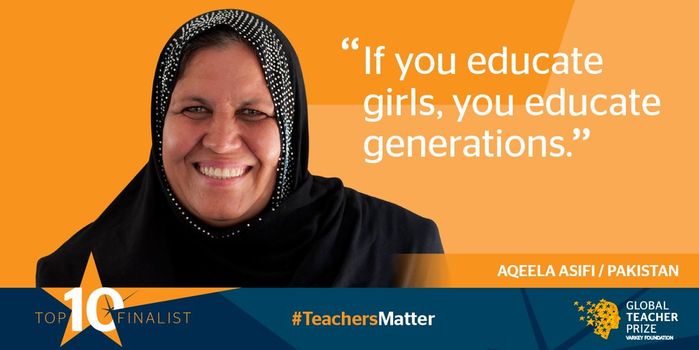 Aqeela Asifi has dedicated her life to teaching. Her untiring efforts in the field have been recognized and lauded universally. Her efforts for furthering the cause of education amongst the refugee population have led to her nomination for the $1 million Global Teacher Prize, under the stewardship of the Varkey Foundation.

Aqeela is a 49-year old, who left Afghanistan in 1992 to seek shelter in a remote refugee camp at Kot Chandna, Punjab. Most girls in the camp were not educated and there weren’t any schools in the area, so Aqeela took it upon herself to educate the helpless girls of the refugee camp.

She set up a school in a borrowed tent and worked very hard to overcome the prevailing negative attitudes. The refugees found education of girls strange and female teachers weren’t widely encouraged. At the beginning, twenty families agreed to let their daughters study with Aqeela. She focused on teaching non-controversial subjects like personal hygiene, religious education and home management.

After some time, Aqeela convinced the refugee community to introduce Dari language, literacy, geography, history and mathematics. There were no resources for blackboards or books, so she stitched pieces of cloth with handwritten text to the tent’s walls. She wrote books by hand and asked the students to write stuff in the dust on the floor.

Fast forward to today, and there are nine schools in the camp with plenty of female teachers and over 1,500 students including 900 girls. Her efforts have also improved the environment in the community and early marriages have seen a decline. Aqeela has taught over 1000 people (Afghani and some local children), most of whom have become leading professionals in Afghanistan.

Aqeela says “If the world wants the underdeveloped countries to progress and prosper, their foremost priority should be providing access to quality education for both boys and girls.”

Last year, Aqeela Asifi was presented with UNHCR’s (United Nations High Commissioner for Refugees) Nansen Refugee Award. Aqeela was awarded for teaching in the Kot Chandna camp for over 20 years. A year passed, and she is now a nominee for the Global Teacher Award as well.