If there’s one thing Facebook has continued following its acquisition of Whatsapp, it has to be value addition. With countless new features, visual overhauls and more, the network is now in a much different shape than it used to be two years ago, and also much larger and widely used than before.

The latest addition in this line of additions has been the option to share files, which had been eerily missing till now. From now on, you’ll be able to share documents on the network, which, especially if you are a student or a professional, you’ll find highly useful.

How to Use Document Sharing

The current option is only limited to sharing PDFs only, however, more options should be coming sooner rather than later. To make it work, you just have to update your app to the latest version.

Then, in your chat, you’ll find a new Document option alongside all the usual ones under attachment icon, with a slight reshuffling being done to accommodate the new option. Though the format options are limited to PDF, the file sharing sources thankfully aren’t; you can share documents from most popular services, including iCloud, Google Drive, Dropbox and Quip. 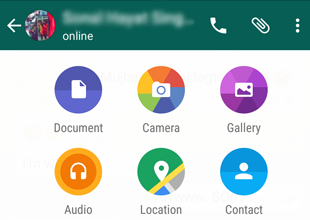 There are reportedly a few teething issues as first, including issues with file detection. When shared, it shows file information including no. of pages, type and size.

The feature is yet another step towards making Whatsapp more viable for business users, as evident by the prevalence of the usage of this format. With features such as end-to-end encryption, the service can become a good option for business users, especially given its reach worldwide.

If you’re on iOS, you’ll also get support for third-party sharing, pinch-to-zoom on videos as well as new background colours.