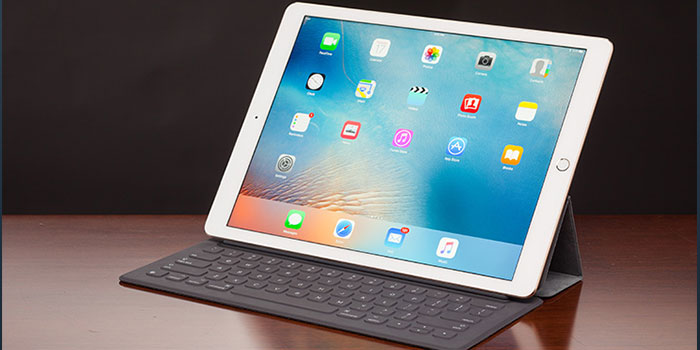 The second big announcement from Apple’s event was the new 9.7-inch iPad Pro, as the emphasis remained on keeping a low footprint. The new tablet is essentially the same iPad Pro with the A9X processor and an anti-reflective TrueTone Display, but in a more compact chassis this time.

The Retina display comes with 2048 x 2732 resolution, and supports the new Night Shift feature in iOS 9.3 which detects the ambient temperature in your surrounding and matches it. It features new ambient sensors to utilize that feature. Furthermore, it is also 25 percent brighter, and 40 percent less reflective than before.
Under the hood, you’ll get a dual-core Twister Apple A9X processor with 4 GB of RAM. Storage capacity options include a 32 GB, 128 GB and a 256 GB version. Apple’s Smart Connector is coming here to support more and more accessories. Four speakers are also home to make the new 9.7-inch iPad twice as loud as the Air 2.
The back camera has been upgraded to a new 12 MP sensor with focus pixels, dual-tone LED Flash and 4K video recording. The front camera is now a 5 MP sensor with support for Retina Flash from the display, which lights up your selfies in low-light with no need for external lighting or a front flash.
The new iPad Pro is also big on the accessory game. For one, the original Logitech keyboard is now made smaller to fit the new tablet with support for Apple Pencil is added. There are also a couple of new accessories including a USB camera adapter and an SD card reader which connects via Lightning.
The new iPad will be available in four colours: silver, gold, rose and space grey. Pricing starts at $599 for the 32 GB model, with the 128 GB model and the 256 GB model coming in at $749 (approx Rs. 78,500) and $899 (approx Rs. 94,100)) respectively. The LTE models are set to cost $130 (approx Rs. 13,600) more for every model. The keyboard itself costs $149 (approx Rs. 15,600). Availability is set to begin from the end of this month.
As is customary, the price of the older iPad Air 2 has been dropped by a 100 bucks to $399 (approx. Rs. 41,800).