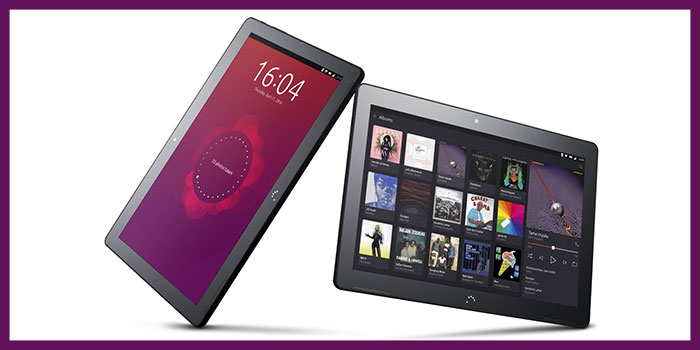 The first Ubuntu Linux tablet is about to come very soon in a store near you. The tablet may not be expected to beat the tough competition which comes especially from the likes of the iPad and Windows or Android tablets, but is still a start which already comes with a few unique features.

It runs on Ubuntu OS v15.04 “Vivid Vervet”. Unfortunately, under the hood you get an ARM processor rather than x86, meaning most Linux applications will be out of your reach. You instead get a 1.5 Ghz quad-core MediaTek MT816A processor with 2 GB worth RAM, again with only 16 GB of storage (11.2 GB accessible) but you can expand it by up to 200 GB via a microSD card.

For connectivity you get Wi-Fi 802.11 b/g/n. There are a bunch of cameras on the front and back, with 5 MP and 8 MP resolution, respectively. There is a 7280 mAh battery that powers the tablet. The specs are pretty much the same across the food chain.

They’ll be available starting from the second week of April. An additional option never hurt anyone, right?