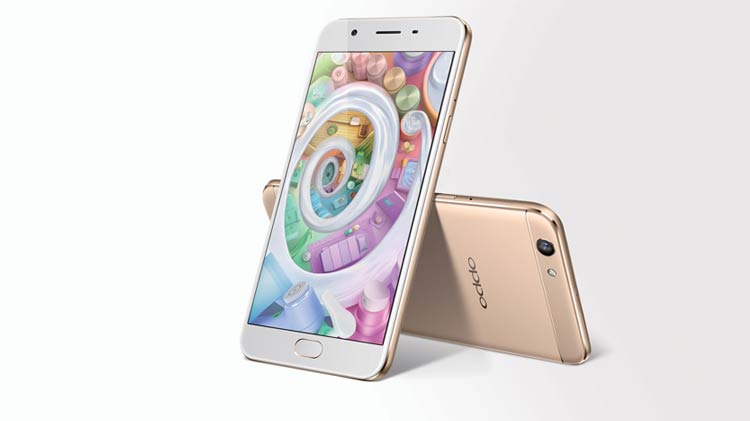 The OPPO F1s is a mid-range device, which was launched in Pakistan earlier this month. The F1s carries over the metal build, most of its design “Selfie Expert” title from its predecessor. We got our hands on the F1s a while back and wrote our first impressions with the phone.

Now it’s time for the full review of the OPPO F1s and to find out whether there is more to the F1s behind the selfie focused phone.

Yes. It does look familiar to another smartphone. If you can’t recall what phone, it is the iPhone 6s Plus. When I first saw the pictures of the phone I was shocked at how similar it looked in appearance and design to the Apple flagship.

On the other hand, the phone is quite sturdy and the built quality is great. The first time I held the F1s, I was amazed how good it felt in the hand. The aluminum also adds a subtle weight to the phone which further enhances the experience. The buttons are nice & clicky and there isn’t any mushy feel to them. More than enough for a mid-range device.

Up on the front you have the 2.5D screen and a 720p 5.5-inch display (more on the display later). The front is clean with no branding whatsoever. And yes, before I forget to mention, the home button below the screen also doubles as a fingerprint reader.

Wrapping up the section, I’d say, that while it does look similar to another device, but at the price it offers one of the best design and build quality and you’d be hard pressed to find many phones in this price range that provide build quality as good as the F1s.

Moreover, a major concern with thin metal phones is that they bend easily. I did try exactly that and the F1s didn’t give any hint of bending at all unlike some other (*cough*iPhone*cough*) aluminum phones on the market. Also, the antenna lines that run across the width of the phone both at the top and back look much better than the iPhone too. So if anything, it looks like Apple could use some design cues from OPPO. #bendgate

The OPPO F1s has a 5.5-inch screen with a resolution of 720 x 1280 pixels which comes out to be around 267ppi. That’s pretty low for a midrange phone in this day and age.

Surprisingly, the display on the F1s is very sharp. There has got be some kind of optimization done by OPPO over here because the display in no way looks an HD one. It’s much better than that. I held it up against another 720p 5-inch device and the difference was easily visible. The colors were vibrant and the viewing angles were excellent too. Viewing videos on YouTube was a treat. The only complaint I found was that some of the highlights on this display were blown. Other than that, the whites were a bit too warm for my liking.

But let’s be honest, when you’re paying 30k for a smartphone in 2016, are you expecting a 720p display? I am hoping your answer is no. Not to mention that the F1s’s predecessor also used a 720p display albeit it was 5-inch. It would’ve been nice to see a 1080p display this time around.

At the end, I’d say this is not the best display I have seen but it is definitely not the worst. Here’s hoping that OPPO goes on to use a higher resolution display next time.

The OPPO F1s uses a Mediatek processor. They have long been considered the underdog in the processor market and are traditionally considered as a cheaper alternative to Qualcomm. However, being an underdog doesn’t mean that you can’t get good performance. And that’s the case here.

Let’s talk numbers first. Just like in our previous review, I say that real world performance is more important than theoretical benchmarks. So, the F1s features an MT6750, which is an octa-core processor clocked at 1.5GHz. On the GPU side of things, it uses the Mali-T860. All of this is backed up with a generous 3GB of RAM.

Now my daily usage consisted of the F1s consisted of mainly snoozing the alarm 5 times, checking Facebook, WhatsApp, playing some graphic intensive games, using navigation to get around and using SoundCloud. For most people, I think there usage would be similar. The F1s performed marvelously and took everything I threw at it like a champ. For my daily driver, I use the General Mobile 4G and using the OPPO F1s was a very welcome change. The extra gig of RAM really showed the advantage. Apps were not reloading every time I opened them from the multitasking menu.

I loaded up Riptide GP2 and I was able to play without any dropped frames. Also, due to the lower pixel count and without having to push too may pixels, the processing package didn’t have to push itself to the limit and as a result, I didn’t face any over heating in the process.

Overall, if you look past the spec sheet, this is an excellent phone in terms of performance. Everything seemed well-optimized and apps opened up quickly. And let’s face it, if you’re after hardware performance, you probably aren’t aiming to buy something in this budget. But even if you are, the OPPO F1s surely won’t be a disappointment.

The F1s runs Android Lollipop 5.1 with OPPO’s custom ColorOS v3.0 on top. Let that sink in for a moment. A phone from Q3 2016 is running a software that was released in 2014. And to top it all off, the software is the farthest thing from stock Android and just like most Chinese phones, comes without an app drawer.

Moving on, I will be lying if I said I didn’t like the UI of the F1s. It’s flat, vibrant and completely functional. The home screen is pretty simple and you get a maximum of 4 items on the dock below. Tap and hold an icon on the home screen and you get a preview of all the pages.

You can drag and drop icons on another page. One thing that I really liked was the ability to “Move in batches”. What it did was it allowed you to select multiple apps on one page and then move them together to another home screen. This eliminates having to move them one by one.

OPPO’s UI also comes with a Theme Store. You can choose one of the many themes that are available on the store and change the interface to your liking. The Settings have a large section of stock OPPO apps at the bottom. I felt like it shouldn’t have been there or at the very least should have been under another sub-heading.

I loved the gesture support on the phone. There were several off-screen gestures including the double-tap-to-wake feature. Another useful feature is that you can use 3-finger swipe up or down on the screen to take a screenshot.

At the end of the day, the software wasn’t half as bad as I expected it to be. Although it was very odd, but I felt like this phone was more suited to ColorOS rather than stock Android.

Although there are a number of phones on the market right now that support fingerprint scanners but I still feel like most of the phones at the lower price point, don’t actually have reliable scanners.

All phone manufacturers like to claim that their phones do all sort of things but most fall short of that promise. OPPO claims that the F1s will unlock in 0.22 seconds. I think that is far from the truth. The F1s unlocks even faster than 0.22 seconds, if that’s possible.

In my testing of the fingerprint scanner, it was always lightning fast and unlocked the phone as soon as I placed my thumb on the scanner. To unlock the phone, just press the home button and you will be greeted with the home screen or wherever you left things before. The fingerprint scanner was fast, accurate.

The setting up process was also very simple. All you have to do is to tap on the fingerprint scanner a couple of times and you are done! What I found really interesting was that you can assign different shortcuts to each of the fingerprint you have stored on the phone. You had the option to open any app installed or a contact that you want to call with just the touch of your finger.

Let’s start with the rear camera. It is a 13MP shooter with an aperture of f/2.2 and an LED flash. The camera is capable of taking some pretty decent photos. The shutter is fast enough and there is hardly any shutter lag. Pictures have some nice amount of detail. However, once it starts getting dark you will notice some noise in your photos and loss in detail.

You get various shooting modes for the rear camera such as Normal (automatic), Ultra HD, GIFs, Double Exposure and Expert Mode.

The front camera on the F1s is no slouch either. You are able to get some really crisp and good looking selfies. I am no fan of taking photos of my face and posting them all over social media, but man, the camera on this thing makes me want to do just that. The pictures are bright and have tons of detail. You also got a front facing “flash” which is actually the screen turning white at the time the shutter opens. There’s also a wide range of filters available so you don’t have to use the Instagram ones anymore.

The camera of the OPPO F1s is so good that it deserves a totally separate post. Therefore, it will be covered in full detail in an exclusive feature coming in the following days.

I am sorry, I don’t have battery stats right now because it hasn’t died yet.

Sure, I am joking but you better believe me. On the spec sheet, 3075mAh doesn’t mean much when other phones come with 3500mAh or even 4000mAh. But the phone is adequate in managing its power. The good battery life was also aided by the phone’s low performance processor and display resolution. I easily got a day of usage on the F1s.

One of the issues I had with the F1s was in the software department related to the battery stats. There’s no chart or readings to show you how much power an application or hardware part is consuming. There is just a percentage reading showing the “Hardware” and “System Apps” use and no time for it. So the reading that I got were obviously not accurate but I was pretty confident. If it could last a day of heavy usage with WiFi on for 100% of the time, then it could do even better with a lighter use.

Unfortunately, the F1s doesn’t use OPPO’s much praised VOOC fast charging capabilities and it takes a painful amount of time to reach 100% of charge. But the battery life makes up for this slight disadvantage.

At the end of the day, this is a phone that I will very easily recommend to someone. It’s got everything you need at this price point, especially the important things such as the camera and the performance.

The F1s ticks all the right boxes for you. I still believe that no other phone in the market right now is as good as the OPPO F1s in a very similar price range and I’d be hard pressed to point one out.

If you’re out in the market to buy one of these, don’t hesitate. The F1s won’t be a disappointment.