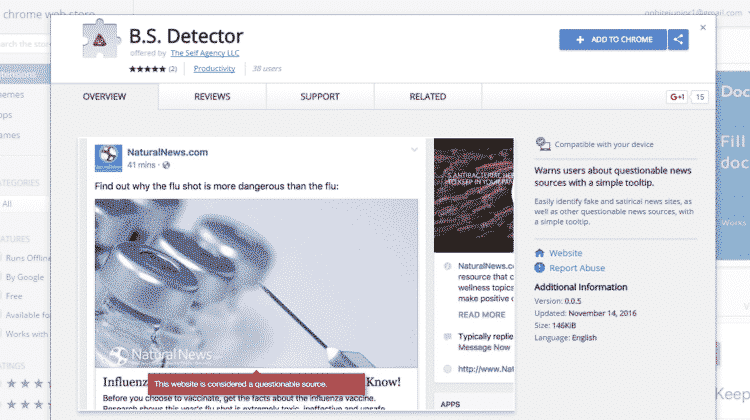 The other day we covered news of how Facebook and Google are designing measures to weed out fake news adverts from their respective websites.

Mark Zuckerberg officially said that the fact that the elections were affected in any way by the fake news circulating about is “pretty crazy“.

A person has decided to step up and solve the problem for them. Daniel Sieradski has created a Chrome browser extension that checks whether a news shared on Facebook (through news websites like New York Times, Engadget or others) is from a reliable source or not.

If fake, a red message shows up telling you “This website is considered a questionable source”.

Daniel just spent an hour to make the extension and made it as a proof of concept. That means he made it to prove that you can easily weed out fake news from your news feed. He said,

I built this in about an hour yesterday after reading [Mark Zuckerberg’s] BS about not being able to flag fake news sites. Of course you can. It just takes having a spine to call out nonsense.

Each Fake News Source Can Be Manually Added

He manually added each website himself that he considered fake and invites other users to submit a request for modifying the database on Github. This goes against the usual method of designing an algorithm to read the articles then report on whether they are actually fake or not.

This tool right now has limited usage in that it can only check fake news on Facebook. Moreover it also has a limited number of websites in its database to compare them with. Other websites could show up in your news feed which may not have been in B.S detector’s database.

Still, the extension is a welcome step towards reducing the fake news problem and should help you or other users to potentially avoid fake news and from sharing it.

You can download the extension from the Chrome Store.