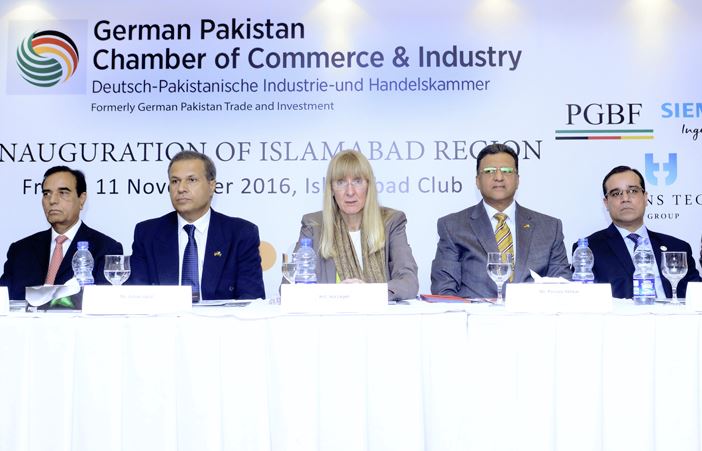 German Pakistan Chamber of Commerce & Industry (GPCCI) has inaugurated its Islamabad Chapter today in an event organized at Islamabad Club which was attended by dignitaries, high profile government officials, businessmen and people from all walks of life.

Her Excellency, Ambassador of the Federal Republic of Germany, Ms. Ina Lepel and DGTO Mr. Azhar Iqbal were also present at the event.

German Ambassador Ms. Ina Lepel, who was the Chief Guest of the inauguration ceremony stated that:

“The German Pakistan Chamber of Commerce and Industry (GPCCI) was launched in Karachi in May to strengthen Pakistani-German business relations. It is a prime example of the energy of Pakistan’s business community. With an existing presence in Lahore, today’s inauguration of the Chamber’s Islamabad office marks an important milestone in the GPCCI’s development. I am convinced that the GPCCI, including its Islamabad Office, can make an important contribution to promoting bilateral trade and investment and to increasing Pakistan’s connectivity.”

President GPCCI (Islamabad region), Mr. Pervaiz Akhtar further elaborated the role of GPCCI (Islamabad Chapter) to further the cause of bilateral relations between the two countries. President GPCCI, Mr. Qazi Sajid Ali, thanked the German missions in Pakistan, the Commerce Ministry, as well as the GPCCI team for extending their support.

The Guest of Honor Mr. Azhar Iqbal, Director General of Trade Organisations, Ministry of Commerce congratulated GPCCI (Islamabad Region) on the inauguration and hoped that the establishment of the Islamabad Chapter of GPCCI would serve to enhance the investments on the local soil and bring in opportunities for joint ventures in future.

GPCCI is the first European bilateral chamber in Pakistan. It supports its members by offering an ever-increasing range of services, aimed at facilitating bilateral trade and direct investment.