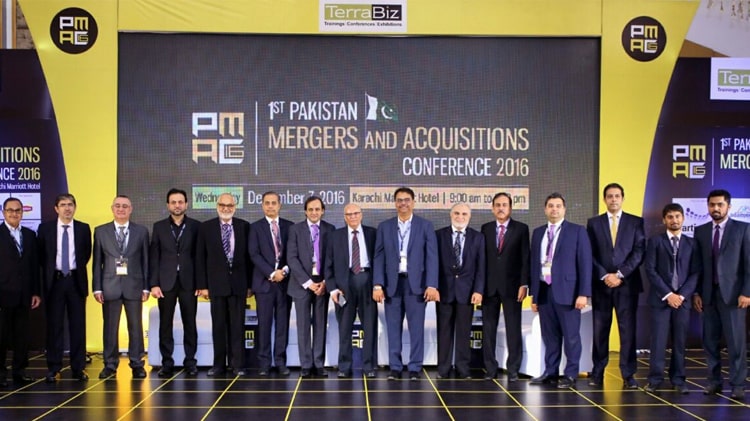 The first ever Mergers & Acquisitions (M&A) Conference in Pakistan was held in Karachi Marriott Hotel on & December 2016. The conference was hosted by Terrabiz in association with Knowledge Partner KPMG.

Hamza W. Hashmi, CEO TerraBiz, opened the conference and gave a brief background of his firm as well as the objective for organizing the conference.

The conference was broken down into four sessions.

The first presented during the Inaugural session was Mr. Adnan Rizvi Partner & Head of Deal Advisory, KPMG Taseer Hadi & Co. His presentation covered Key insights from the Global Trends in M&A and their relevance for Pakistan.

The Key note speaker was Mr. Samad Dawood, CEO of Dawood Hercules Corporation Ltd. He gave a detailed presentation on the topic “Lessons learnt from M&A”.

The last presenter during this session was Mr. Murat Olcayto, CFO of Dawlance [Arçelik A.S., Turkey] who spoke on the topic “Why Pakistan as a Destination for Investment”.  He identified the reasons why Arçelik chose to invest in Pakistan and particularly in Dawlance.

Session two started with a presentation by Mr. Nadeem Hussain – Founder & Former CEO & President Tameer Microfinance Bank during which he highlighted the key aspects of the acquisition of Tameer Bank by Telenor.

All the participants gave a brief presentation which covered the key M&A transactions that happened in the Pharma, Telecom & Banking sectors during the past decade. The presentations were followed by the Q&A session which was moderated by Farid Khan, CFA – CEO, HBL Asset Management.

During the Q&A the moderator sought key insights on the transactions in which the panelists were personally involved.

The discussion was moderated by Mr. Fawaz Valiaani – Chief Executive Officer, Elixir Securities Pakistan. The moderator asked insightful questions the answers to which provided valuable information to the participants about the do’s and don’ts of a successful M&A deal.

The panel discussion was moderated by Mr. Muhammad Sajid, CFA – CEO, Core Advisors. The presentations as well as the Q&A session focused on the importance of the “Role of advisors in M&A transactions”.

The conference concluded with a vote of thanks to CEO TerraBiz, Mr. Hamza Wasi Hashmi.