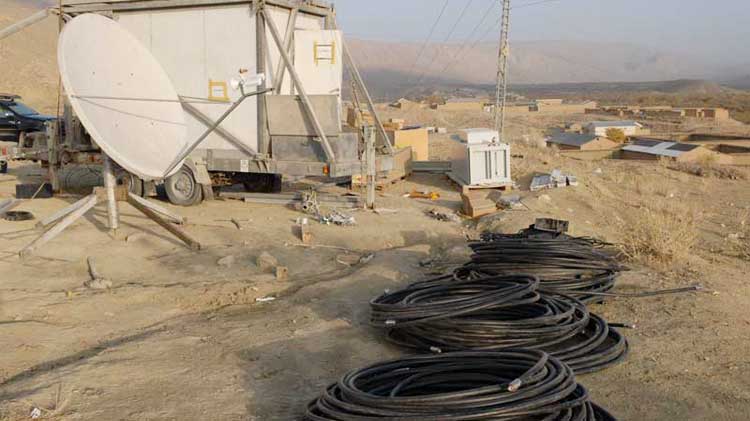 The Universal Service Fund (USF) on Monday awarded Awaran/Lasbela Lot worth Rs 2.33 billion to Pak Telecom Mobile Limited (Ufone), under the Broadband for Sustainable Development (BSD) project to launch 3G services in backward areas of Balochistan.
Acting Chief Executive Officer (CEO) USF Haaris M Chaudhary and Acting CEO Ufone Nadeem Khan signed the contract while State Minister for Information Technology and Telecom Anusha Rehman and Finance Minister Ishaq Dar witnessed the signing ceremony.
An un-served population of about 196,177, covering 269 un-served mauzas and an un-served area of 39,434 sq kms will get modern broadband facilities through this project.
About 72 new BTSs (mobile towers) will be installed to provide mobile broadband internet/3G services in the area.
The Awaran/Lasbela Lot covers 12.8 percent of the area and 6.5 percent of the total estimated population of Balochistan and includes Awaran and Lasbela districts. This lot shares borders with Karachi and Dadu districts in the east, Khuzdar and Washuk in the north, Panjgoor and Kech in the west and Gwadar district in the south.
The project would cover Awaran, Jhal Jao and Mashkai tehsils/sub-tehsils of Awaran district and Bela, Lakhra, Liari, Uthal, Dureji, Hub, Sonmiani and Kanraj of Lasbel district.
Addressing on this occasion Anusha Rehman said that USF has successfully initiated six new projects under this category in the provinces of Khyber Pakhtunkhwa and Balochistan.
USF has set a target to reach all under-served and un-served areas of the country with rural telephone and e-Services (RTeS) by first quarter of 2018, she added. Despite massive growth in telecom, vast areas remain of the country is still un-served. On the other hand, telecom is one of the most important tools for rapid development, especially in rural areas. The USF has been given the mandate to provide telecommunication services in underserved and un-served areas.
She said 190 villages of Turbat, Gwadar, Ketchh and Panjgur are also being connected under the scheme. Anusha Rehman said under the vision of connecting the unconnected, we are making efforts for maximum digital connectivity.
She said with wide spread array of infrastructural network under the CPEC, the government in collaboration with partners laid down sixty four hundred kilometers optic fibre network digitally linking the whole country.
Finance Minister Ishaq Dar said that the government is committed to bring people of all areas into the country’s financial and digital mainstream. The Finance Minister assured provision of IT network in FATA while saying that security would be ensured. He said that some projects of USF are commercially not viable; however it is government’s commitment to reach the un-served and bring them in the digital mainstream.
He further said that Multan-Sukkur section of Karachi-Lahore Motorway was commercially not viable but the Government brought it under the ambit of CPEC with estimated cost of $3 billion to implement the project successfully.
Ishaq Dar said that the country would get rid of the menace of load shedding in 2018 which has been reduced to a great extent.
The USF has provided telecommunication facility to 310 underserved towns and provided over 6400 km fibre optics so far. In addition to that USF has established 50 computer labs in Bait-ul-Maal for women empowerment centres, said Acting CEO USF.